Agattu is the second-largest island in the Near Islands group in the far western Aleutian Islands. It is a volcanic island with mountainous relief and maritime tundra vegetation. The coastline is indented by fjords and bordered by cliffs up to 100 m high. Arctic foxes were introduced to Agattu Island for fur farming in the early 1900s, damaging native bird populations, but by the late 1960s the US Fish & Wildlife Service had eradicated foxes from the island. Agattu Island was subsequently the first site for the successful translocation and reintroduction program of the recently de-listed Aleutian subspecies of Cackling Goose. In addition to waterfowl and shorebirds, Agattu Island hosts large concentrations of colonial seabirds, such as Tufted Puffin and Black-legged Kittiwake, as well as smaller numbers of rarer seabirds such as Kittlitz's Murrelet and Red-faced Cormorant whose low population numbers range-wide qualify them as species of conservation concern.

The information presented here is a revision, based on the original IBA nomination by Olga Romanenko (Audubon Alaska) and G. Vernon Byrd (AMNWR).

There are several large seabird colonies on Agattu Island, including significant populations of Black-legged Kittiwake, Pelgaic Cormorant, Red-faced Cormorant, Tufted Puffin, and Horned Puffin. The largest colonies are located in the southeastern region of the island in the vicinity of Cape Sabak. This island was the first site for the successful translocation and reintroduction program of the recently de-listed Aleutian subspecies of Cackling Goose. Beginning in 2003, Evermann's subspecies of Rock Ptarmigan has also been successfully reintroduced on Agattu Island. Recently, nearly a dozen Kittlitz's Murrelet nests were discovered on the island; this is the world's largest known concentration of nests of this highly imperiled species. Other inhabitants of the island include species common throughout the Aleutians, such as the Rock Sandpiper, Red-necked Phalarope, Gray-crowned Rosy Finch, and Snow Bunting. Agattu Island is closer to Asia than to North America, and its avian diversity reflects its unique biogeographic location, with regular occurrences of Asian species. A combined count of Common Murres and Thick-billed Murres, carried out in 2003, totaled 7,700 individuals. In addition to 577 Pelagic Cormorants and 745 Red-faced Cormorants recorded in 2003, a further 319 unidentified cormorants were also observed.

The current and known threats to birds across the Aleutians, including Agattu Island, include:

*Invasive species: Shipwrecks of commercial cargo ships and other ships regularly occur in the Aleutians, and can result in the accidental introduction of non-native species. Invasive species can also be brought to islands by visiting ships (e.g. fishing, ecotourism, military, or research vessels).

*Shipping: Shipwrecks regularly occur in the Aleutians, and can result in spills of fuel oil, petrochemical cargo, or other damaging cargo, as well as non-native species (see Invasive Species above).

*Climate Change: Climate change has been shown to alter food webs and is likely to change species populations and distributions; though it is important to note that this is not strictly a threat in the sense of population reduction, since some species may increase while others decline.

Arctic foxes were introduced in the early 1900s for fur farming, but were eradicated by the late 1960s. As yet, no rodents have been detected on Agattu Island. Proximity to the rat-infested Attu Island and Shemya Island may increase the risk of rat invasion at Agattu Island.

Potential threats to birds across the Aleutians, including Agattu Island, include:

Agattu Island is entirely federally owned. It is managed by the US Fish &amp; Wildlife Service as part of the Alaska Maritime National Wildlife Refuge. Less than 1% of Agattu Island has been "selected" by the Aleut Corporation.

Agattu Island is part of the Alaska Maritime National Wildlife Refuge. As such, nature conservation and some research is the current dominant land use. 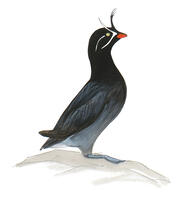