The Edwards Plateau in Central Texas is an elevated expanse of land covering 35,000 square miles in area. It is bordered on the south and east by the Balcones Escarpment, also known as Balcones Canyonlands. European settlers came to the Edward?s Plateau region in the mid-1800?s and immediately created major landscape changes to the region, mainly through overgrazing of cattle and sheep. Along with historical habitat destruction, the current rate of urban development, in the Texas Hill Country, is removing and fragmenting wildlife habitat at an alarming rate. In order to save wildlife habitat from encroaching development, the Balcones Canyonlands Preserve (BCP) was created to protect the remaining large blocks of high quality habitat in Travis County. The Balcones Canyonlands Conservation Plan created the BCP to protect and maintain habitat for two federally endangered birds, the Golden-cheeked warbler and the Black-capped vireo, and six federally listed karst invertebrates found only in central Texas caves. Travis County, the City of Austin, the Lower Colorado River Authority, Travis Audubon Society, the Nature Conservancy, and a number of private landowners cooperate in owning and managing properties designated within the preserve acquisition area. The BCP is located in the western portion of Travis County, Texas and consist of approximately 11,000 hectares of prime habitat for Golden-cheeked warblers. The preserve also provides protection to two rare plant species, Texabama croton and canyon mock-orange.

Central Texas is an important area, because the federally endangered Golden-cheeked warbler (GCWA) breeds exclusively in the juniper-oak forest of central Texas. GCWA presence can be predicted by the percentage of continual woodland cover and larger forest patch size, therefore human development and habitat fragmentation has a significant impact on the presence of GCWA. The Balcones Canyonland Preserve (BCP) is an Important Bird Area because it consists of approximately 11,000 hectares of prime GCWA habitat located in one of Texas? fastest growing counties. In Travis County, development has expanded westward from the City of Austin at a rapid pace increasing the amount of destruction and fragmentation of GCWA habitat. In 1996, the U.S. Fish and Wildlife Service approved the Balcones Canyonland Preserve Plan (BCPP) in order to slow down and mitigate development in Travis County. The BCPP required approximately 12,000 hectares of prime endangered species habitat to be acquired and set aside as the preserve. Currently the BCP consist of approximately 11,000 hectares and is the largest area of protected GCWA breeding habitat in the world. GCWA utilize ashe juniper bark exclusively for nesting material and require the hardwood oaks to support food sources to feed and raise young.

Along with GCWA habitat, the BCP also contains critical habitat for the federally endangered Black-capped vireo (BCVI). BCVI habitat has been reduced do to suppression of natural disturbances, such as fire, and habitat loss due to urban development. Currently BCVI are restricted to breeding in portions of central Texas, three counties in Oklahoma and areas of northern Mexico. Breeding BCVI populations have been reported in 38 central Texas counties. Of the 12,000 hectares that are to be set aside as the BCP, a minimum of 800 hectares must be managed as BCVI habitat. BCVI habitat consists of shrubby second growth thickets consisting of woody species including shin oak, ashe juniper, sumac species, ash species and redbud her in Travis County. This habitat is managed and restored by mechanical habitat manipulation and/or prescribed fire mimicking natural disturbances that once occurred in this region

By managing for GCWA and BCVI, the BCP creates a healthier environment for other important birds, such as, painted buntings, yellow breasted chats, loggerhead shrikes, scissor-tailed flycatchers, Bewick? wren, red-winged and broad-winged hawks, and many song birds and migrants. Through habitat restoration, removal of invasive plants and animal species, and an ecosystem approach to land management, the BCP?s goal is to maintain and improve populations of both GCWA and BCVI in Travis County, maintain habitat for all native wildlife, and provide safe harbor for our spring and fall migrants.

Most of the habitat located within the Balcones Canyonlands Preserve is a dry shrubland dominated by Oak-Juniper woodlands. Parcels of land that are adjacent to the Lower Colorado River contain a small amount of Riparian habitat along the River.

Most of the land within the Balcones Canyonlands Preserve is set aside for conservation and management, but some educational and outreach programs takes place on particular tracts owned by certain entities. Public access, such as hiking and mountain biking, is allowed on tracts which allowed public access prior to the establishment of the BCP, in 1996. Ornithological and Ecological research, such as monitoring of golden-cheeked warblers; black-capped vireo distribution, abundance, and productivity monitoring; faunal surveys of protected karst features; research into the habitat effects and management of native and non-native wildlife populations; impacts of exotic and invasive plants and their control; and ecosystem monitoring to ensure appropriate management for all of the region?s unique native wildlife, take place on several parcels with in the BCP. 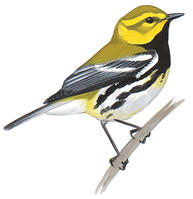 Find Audubon Near You</