Blackland Prairie is composed of three remnant tallgrass prairie patches: Rick Evans Grandview Prairie Wildlife Management Area (4,885 ac; Arkansas Game & Fish Commission), Columbus Prairie Preserve (120 ac; The Nature Conservancy), and Saratoga Landing Blackland Prairie (208 ac; owned by the Corps, managed by The Nature Conservancy and Arkansas Natural Heritage Commission). Shrubby vegetation has invaded in some places. Tree-lined fencerows, waterways and woodlots are interspersed throughout each area. The prairie community owes its existence to calcareous substrates of Cretaceous origin that weather to produce a tight very black soil, from which the name Blackland Prairie is derived. These calcareous bedrocks, which exist from northeastern Texas, southwestern Arkansas, northern Mississippi, and northern Alabama, produce strips of prairie in primarily forested regions. To get to Columbus Prairie from Hope, take Highway 278 north; turn left (west) on Highway 73 and proceed 13 miles to Columbus; turn right (north) just before the white church on County Road 35 and go approximately one mile until you see the sign on the left.

For all of the species listed above, the personal observations were by several people including Doug Zollner, Bill Shepherd, Herschel Raney, Bill Holimon, Charles Mills, Dr. Doug James, and Andrea Green. Partial surveys have been compiled through the 1990s and 2000s. The numbers observed of the species listed are characteristically low (exact numbers observed were not listed). If there were more complete surveys of the total prairie area there obviously would be higher numbers. The important thing is that the species are sequestered in their special habitat which is now protected from disappearing entirely. The prairies are a refuge for these species of conservation concern in Arkansas. The Dickcissel, which is not on the Arkansas list, is abundant on the Grandview Prairie and is included here because that species is named on several other lists of birds of conservation concern. There are lists showing the birds found at Saratoga Landing and Grandview Prairies, compiled by The Nature Conservancy. These lists show only that the species named are present and do not give numbers of individuals. The three prairie sites support populations of 12 bird species that are included on the list of Arkansas Birds of Conservation Interest. The site includes one or more outstanding examples of the following special bird habitats: prairies and scrub-scrub habitats. The blackland tall grass prairie habitat and its associated shrubland was originally widespread in southwestern Arkansas but had all but disappeared due to agriculture and other developments by the mid 1900s. The few patches of prairie now preserved are due to action taken by conservation organizations in the latter part of that century. The site provides important, bird-specific educational opportunities. Part of the title designating the Grandview Prairie Wildlife Management Area is the phrase "and Conservation Education Center." Therefore, the site serves as a significant educational center focusing on the prairie ecosystem, its flora and fauna including birds. There are splendid facilities for accomplishing this mission including meeting rooms and classrooms plus a dormitory and dining room for overnight lodging. School children and adult groups are accommodated for various educational opportunities. The roads through the area are dotted with educational plaques at turnouts. These plaques are portraits depicting prairie scenes including indigenous prairie birds complete with accompanying descriptions of the prairie ecosystem. This site is important for Arkansas birds because the three prairie areas collectively play host to 12 avian species that are included on the list of Arkansas Birds of Conservation Interest. None of the birds are very abundant on the prairies, but that is their nature in Arkansas and reason for their listing. Most of the species are uncommon in Arkansas because their habitat has been diminished. That is why the prairie areas described herein are so important, providing some last remnants of the habitat these birds require. The Dickcissel is very abundant on the Grandview Prairie. Moderate numbers of Eastern Meadowlarks occur in winter and summer on Grandview Prairie, which is of interest because this species is decreasing. Since 1996, it has decreased by 68% across its range shown by results from the nationwide Breeding Bird Survey, and it has decreased by 29% as indicated by results from the Christmas Bird Counts. 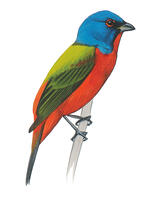