This IBA area begins at the point of entry of the Blue River into Arizona (from its headwaters in New Mexico), which is east of Alpine, AZ. The site follows the Blue River to its confluence with the San Francisco River and includes the selected tributaries of the Campbell Blue River and KP Creek. The site also includes the San Francisco River in from its entrance into Arizona, and ends near Clifton, AZ. The Blue River nomination area includes approximately 40 miles of the Blue River, ten miles of the Campbell Blue River, 5 miles of KP Creek, and over 20 miles of that portion of the San Francisco River under Forest Service jurisdiction in Arizona. This river system and approximately a 3/4 mile buffer on either side comprise this site. The elevation ranges from nearly 9,000 feet at the highest points of the Campbell Blue headwaters near Alpine to about 3,300 feet along the San Francisco near Clifton. Of the total 400,000-acre Blue River watershed, 99% is managed by the U.S. Forest Service for the public. Fifty-five percent of the watershed is a designated Primitive Area. The remoteness and limited accessibility to this area may be an asset to long-term conservation of its riparian and associated habitats that are at risk from disappearing throughout Arizona and the Southwest.

This remote IBA provides refugia for the Mexican spotted owl and the "Apache" northern goshawk.

Historically, the greatest stress to the river system has been caused by livestock grazing, which caused significant hydrological changes. Removal of upland and riparian vegetation and the exposure of highly erosive soils contributed to increased erosion, subsequent reduction in the natural meandering of the stream, scouring, sedimentation, flooding, and channelization of the river corridor. The U.S. Forest Service has acted to remove most livestock grazing from the main Blue River over the last decade, allowing for the natural regeneration of the riparian habitat and recovery of natural hydrological processes.

Bark beetle infestation and drought stress in the upper watershed along with fire suppression contribute to a risk of catastrophic fire. Such a catastrophic fire threatens vegetation and can cause adverse changes to the hydrology of the river through loss of old trees, exposure of erosive soils, potential flooding, sedimentation, and scouring.

Exotic crayfish are present in the streams and pose significant threat to native fish, amphibians, and aquatic invertebrates on which native species depend.

Recognized land within this IBA is managed by the Apache-Sitgreaves National Forests. Private lands within the IBA boundary are not included. Private land owners may request inclusion by contacting Audubon Arizona.

Land-use changes: The ranching lifestyle has been diminishing and the community of residents are changing from ranchers to second-homeowners, retirees, and outfitters. With these changes, there is a potential for increased subdivision and development on private lands. Opportunities may also arise as tourism may be potentially be seen as a new source of revenue. 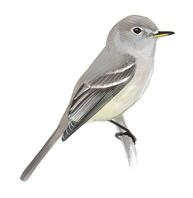