In the remote Pajarito Mountains of southeast Arizona, California Gulch, a unique thorn-scrub vegetated canyon, has been identified as an IBA in Arizona. California Gulch IBA is 5 miles west of Sycamore Canyon IBA. It is accessed from Ruby Road by a rugged road south into the drainage. The canyon is unique with its dense shrub layer on its steep sides, and a perennial spring-fed stream draining into Mexico.

California Gulch has a small but consistent population of Five-striped Sparrows (10 to 15 pairs), a Species of Conservation Status (National PIF Watchlist). This species probably has the smallest regularly occupied breeding range of any bird in the U.S. (excluding island nesters), which is localized to the Pajarito Mountains and Patagonia Mountains (and sometimes the southern Santa Rita Mtns.). This IBA has probably the best habitat for Five-striped Sparrow within their U.S. range. Additionally, the canyon supports nesting Gray Hawk, Montezuma Quail, Yellow-billed Cuckoo, Tropical Kingbird, Black-capped Gnatcatcher, and Lucy?s Warbler (very abundant), all of which are Species of Conservation Status. The canyon also supports Buff-collared Nightjar (3 pairs, M. Stevenson pers. com.) a rare species in Arizona.

Cattle grazing in the area is an impact to the riparian vegetation, causes erosion, and degrades stream water quality. Illegal immigrant passage and illegal drug smuggling are serious concerns, affecting both habitat quality and human visitor safety. Past mining activities may be a concern due to soil/water contamination.

Land use by the Forest Service allows for cattle grazing in the area. Hunting for Coue's Whitetailed deer and Javelina is popular. Montezuma (Mearns') Quail hunting also occurs seasonally. The IBA is a popular bird watching destination and is oftened visited by professionally guided bird watching trips. Proximity to the Mexican border is seeing increased human foot traffic as people cross northward illegally. Two riparian exclosures (size unknown), private in-holdings between them, otherwise the area is not protected.&nbsp;There are small private parcels within the canyon, and mining has occurred on these parcels. 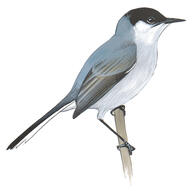