A large, sandy arroyo with tall banks in a developing part of metro Albuquerque. Located west of the Rio Grande just north of Irving.

Directions: On the west side, from the Rio Grande River up Irving past Paradise Hills.

The largest breeding population of Bank Swallows in the state. This population is being threatened by urbanization.

This area is being rapidly developed as Albuquerque continues to expand. The Bank Swallow is in severe danger of being extirpated. Development issues and potential concreting the walls of the arroyo could happen any year.

Drainage for part of the west side (Paradise Hills, Rio Rancho). 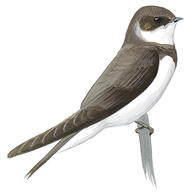