This site is one of the most diverse and unique bird areas in the state. Camp Nine hosts the largest state populations of several species, and some species found here annually are extremely rare anywhere else in the state at any time. The diversity of birds (285 species) found at this site is impressive, but the sheer numbers of birds are even more astounding.

The Camp Nine Reservoir's banks have eroded to the point that the site will barely hold enough water to use. The banks need to be repaired to ensure that the emergent habitat is not lost. If the banks erode much more, this site will have to be drained for a long period of time, and this special habitat could be lost forever.

Camp Nine is a private working farm entirely owned by the Baxter family. 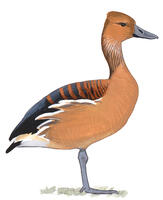