Creation of Carlsbad Cavern 250 million years began with the creation of a 400 mile long reef in an inland sea that covered the region. Cracks developed in the reef as it grew seaward. Eventually the sea evaporated and the reef was buried under deposits of salts and gypsum. A few million years ago, uplift and erosion of the area began to uncover the buried rock reef. Slightly acidic rainwater seeped down into the cracks in the reef, slowly dissolving the limestone and beginning the process that would form underground chambers. At the same time, hydrogen sulfide gas, migrating upward from oil deposits dissolved in the ground water to form sulfuric acid. The exposed reef became part of the Guadalupe Mountains. The park is home to the Carlsbad Caverns Wilderness Area of 33000 acres. The park is part of the northern Chihuahuan Desert ecosystem, where grassland vegetation and desert shrub give way to pine woodlands at the highest elevations.

Directions: Take US-62/180 southwest from Carlsbad to White City, turn west onto NM-7 to the Carlsbad Caverns Visitor Center. The natural entrance is a short walk.

Largest population of nesting Cave Swallow in New Mexico. This species been banded here since 1980.

Potential problem by turning on lights at wrong time. 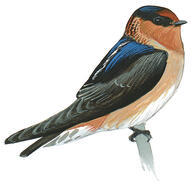