This IBA extends from Dall Point south to Cape Vancouver on Nelson Island and includes four major embayments (Kokechik, Hooper, and Hazen bays and the mouth of the Kashunuk River).

Adjacent to the 220 km of shoreline in this area are about 300 km of unvegetated intertidal flats that intergrade into over 4,000 km of vegetated intertidal and coastal tundra. Most of the lands above mean high tide are within the Yukon Delta National Wildlife Refuge.

The Central Yukon-Kuskokwim Delta IBA comprises about 1/3 of the total Yukon-Kuskokwim Delta. In this area, coastal zones support very high densities of waterfowl and shorebirds. The greatest density and diversity of shorebirds using intertidal habitats in Alaska have been recorded in the coastal area from Hazen Bay to Hooper Bay (within the area between Cape Romanzof and Nelson Island).

This site is the most important autumn staging area for shorebirds in the Pacific flyway, and only a handful of other sites at comparable latitudes worldwide approach it in significance. The central delta alone supported peak numbers of nearly 300,000 shorebirds during single day September surveys. About half of the world's Western Sandpiper population (2-3 million birds) nest on the Delta and probably 70-80% of the population uses coastal littoral habitats during the post-breeding period. In addition, the majority of the Pacific flyway populations of Dunlin, the tschuktschorum race of the Rock sandpiper (50,000), Bar-tailed Godwits (100,000), and Bristle-thighed Curlews (<10,000) occur annually on the Yukon Delta. Over 90% of the flyway's population of Black Turnstones (80,000) nest on the outer delta, and more than 75% of the flyway's Red Knots (100,000+) use the central Delta in spring.

The area also provides some of the finest waterfowl breeding grounds in Alaska. The Yukon-Kuskokwim Delta is the breeding area for the entire Alaskan populations of Emperor Goose, Cackling Goose, Pacific Brant, and about 80% of the Greater White-fronted Goose population.

The Yukon Delta National Wildlide Refuge is recognized as being of Regional Importance by the Western Hemisphere Shorebird Reserve Network (WHSRN).

Gill, R.E. and Handel, C.M. 1990. The importance of subarctic intertidal habitats to shorebirds: a study of the central Yukon-Kuskokwim Delta, Alaska. Condor 92: 709-725.

Human population growth has increased village wastewater disposal, garbage disposal, and damage to fragile habitats due to motorized access (snowmobiles and all terrain vehicles) between villages, to allotments, and for resource harvesting activities (hunting and fishing).

Increasing potential for oil and gas development and mining activities in the area.

As a result of gold mining, a high level of arsenic (as well as other chemical byproducts) is washed into off-shore waters.

Best studied and documented area, which proves to be most important for geese is located between Cape Romanzof and Nelson Island 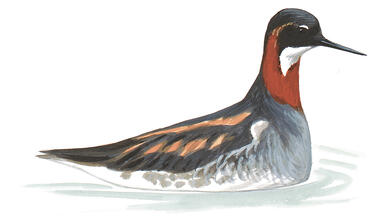