East Sand Island is a highly modified natural island, five miles inland from the mouth of the Columbia River. It is low-lying, long, and narrow, about 1 kilometer in length and about 200 yards wide at its widest, and has an area of about 50 acres. The island was capped with dredge spoil at the eastern end by the U.S. Army Corps of Engineers, and there is extensive rock revetment along the south shore from the midpoint to the west. It is comprised of coarse to fine sands and silt, with a thin topsoil layer. It has slightly rolling topography with a large stone jetty at the west end. The shoreline consists of sandy beach, mudflats, steep sandy berm, and rocky shoreline and an extensive, gently sloping intertidal flat extends to the north into Baker Bay. There is a large tidal pond near the west end, but otherwise the soil is generally well-drained. The island is densely vegetated in the midsection, with the interior covered with scotch broom, Hooker's willow, red alder, and a few young Douglas fir. The shoreline is dominated by European beachgrass and American dunegrass. It is surrounded by extensive sand and mud flats at low tide. East Sand Island is the nesting site of the largest Caspian Tern colony in the world.

East Sand Island is the nesting site of the largest Caspian Tern colony in the world (ca. 9,900 breeding pairs). The colony represents about 67% of the Pacific coast population, about 25% of the North American population and perhaps 10% of the worldwide population. It also is a nesting site for the largest known Double-crested Cormorant colony, currently about 12,000 breeding pairs. The colony represents about 41% of the entire breeding population of the Western North American population. There is an increasing number of Brandt's Cormorants nesting amongst the DCCO colony, numbering over 700 breeding pairs. This is currently the only colony of Brandt's Cormorants in the Columbia River estuary, and by far the largest inland cology for the species. Up to 18,000 California Brown Pelicans have used ESI as a post-breeding nighttime roost, the largest known roost of its kind. No nesting attempts by California Brown Pelican have been detected on ESI. Nevertheless, it is an important site for this formerly endangered subspecies. There is a large breeding population of Glaucous-winged/Western Gulls (>5,000 pairs) and a smaller breeding population of Ring-billed Gulls (~500 pairs); both gull colonies are the largest of their kind in the Columbia River estuary. Small numbers of Pigeon Guillemots nest at the west end of the island in the rock jetty.
Three species of loons occur as spring and fall migrants and have been observed in the estuary near the island during the winter. Grebes occur in the estuary particularly in bays, during migration and in winter. Brown pelicans typically occur from late spring to mid-fall along the coast, with concentrations of up to 20,000 birds at the mouth of the Columbia at South Jetty and East Sand Island-Baker Bay (Briggs et al. 1992 IN Corps 1998). Nine gull species commonly occur along the Oregon / Washington coast, and three others are known to occur. Caspian Terns are present from April to September and during the late 1980s and 1990s the breeding colony occupied an area of about 8 acres at the western end of Rice Island, a dredge spoil island at river mile 21. This tern colony was relocated to East Sand Island during 1999-2001, where all Caspian Tern nesting in the estuary has occurred since 2001. That Caspian Tern breeding population in the Columbia River estuary has grown from 0 pairs in 1984 to about 10,000 pairs in 2008. Much of this increase appears to have occurred from colonies at other locations shifting to the Columbia River estuary, apparently due to habitat loss and declining forage fish availability at former colony sites along the coast of Washington. Waterfowl are seasonally abundant. Agricultural lands along the river and intertidal marshes in the estuary provide substantial habitat along the lower river. Mallards, Northern Pintails, American Wigeon, Green-winged Teal, Canada Geese, Bufflehead, scaup, and scoters are the most abundant wintering species. Mallards and Canada Geese are the principal nesting species. Islands, particularly dredged material disposal islands, are important nesting sites for the resident populations of Canada Geese and Mallards. Raptors (eagles, hawks, falcons, owls) occur both as residents, migrants and/or wintering birds. Bald Eagles are relatively abundant. Peregrine Falcons are also present. Many other nongame bird species occur throughout the estuary. Shorebirds are abundant during spring and fall migration, with substantial numbers overwintering in the estuary. Large concentrations of shorebirds use high tide roosts at the downstream tips of Rice Island and Miller Sands Spit. Savannah and White-crowned sparrows and Streaked Horned Larks, a species of special concern, inhabit dredged material disposal sites, where the open, sparsely vegetated terrain provides preferred nesting and foraging habitat. (Contributed by Herbert Curl, Jr.)

US Army Corps of Engineers owned and managed.

The East Sand Island IBA is used for: non-recreational fishing. 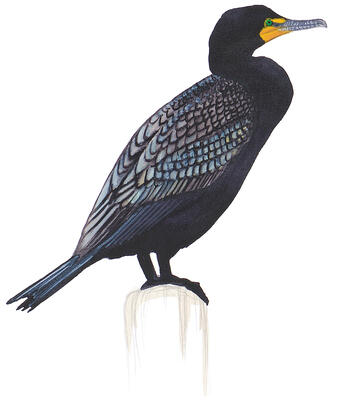 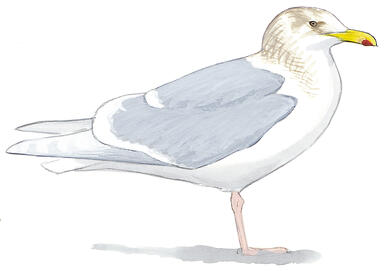