This IBA is a complex of seven sites (Good Earth at Blood Run, Newton Hills , and Union Grove State Parks; Oak Ridge , Fish, Johnson and McKee Game Production Areas)  in south-eastern South Dakota. All of these sites, except for Union Grove State Park, lie along the Big Sioux River. These sites support forest patches that are western outliers of the eastern Deciduous Forest biome. Because of this, they support a unique breeding assemblage of eastern species, as well as hosting an outstanding diversity of migrant landbird species.

Because these sites are state-owned, threats are minimal. However, exotic plant species are a significant threat. Buckthorn can grow in dense thickets in the understory, crowding out ground-nesting forest birds such as American Woodcock Eastern Whip-poor-will, and Ovenbird. Red Cedar is invading old fields used as display grounds by Woodcock.  Hilltop native prairies are being invaded by smooth brome.

All sites in the complex are owned by the state of South Dakota.63% State Park37% Wildlife Management Area

The three state parks are preserves used for recreation, conservation and environmental education. Each park has a small campground and picnic areas. The three Game Production Areas primarily are for wildlife management; hunting is allowed. 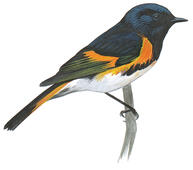