This rugged area (elevation change from sea level, along the Hudson
River, to over 1,400 feet on the summit of Mt. Taurus) lies in a heavily
wooded section of Putnam County, a very developed part of the state,
and provides a resource for hiking, skiing, swimming, boating, fishing,
bow hunting, camping, and other recreational activities. It includes the
largest state park in the Taconic region, Fahnestock State Park, and
the Hudson Highlands State Park. The Taconic Outdoor Education
Center educates school and recreational groups and presents a variety
of public programs. Within Fahnestock State Park, the Hubbard/
Perkins Conservation Area is a large unfragmented forest tract. The
area includes six lakes, a hemlock stream ravine, and marsh habitat.
Much of the forest is oak and mixed hardwoods, with an understory
of mountain laurel. According to the NY GAP land cover data,
approximately 90% of the site is forested, and includes Appalachian
oak-pine, deciduous wetland, evergreen northern hardwood,
evergreen plantation, oak, and sugar maple mesic forests. Also present
are relatively large stands of hemlock and white pine.

This site is listed in the 2002 Open Space Conservation Plan as a priority
site under the project name Fahnestock State Park and the Highlands
Greenway Corridor. Portions of the Fahnestock State Park have been
designated a state Bird Conservation Area. There are some potential
pollution problems from oil spills and dumping in the Hudson River.
Hiking traffic can be very heavy during the warmer months and could
pose a threat to nesting Peregrine Falcons, so should be carefully
monitored. Some wetlands have populations of invasive common
reed (Phragmites australis), which should be monitored. Increased
mountain bike traffic and the illegal use of all-terrain vehicles may be
problematic and need to be monitored. Inventory and monitoring of
breeding birds, especially at-risk species, are needed. 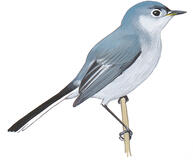