These hammocks are essential for the survival of White-crowned Pigeons in the United States, which nest on mangrove keys in Florida Bay but forage in tropical hammocks on the Mainline Keys. The hammocks are also Significant stopover areas for Neotropical migrants, and the hammocks and mangrove forests are breeding habitat for several other primarily West Indian birds restricted in North America to extreme southern Florida (e.g., Mangrove Cuckoo, Gray Kingbird, Black-whiskered Vireo, ?Florida? Prairie Warbler, and ?Cuban? Yellow Warbler). Overall diversity is at least 143 native species.

The unique tropical hardwood hammocks and pine rocklands of the Florida Keys?forests composed primarily of West Indian vegetation?shelter several extremely rare animals, but are being lost at a rapid rate due to development. If acquired completely, sites of the Florida Keys Ecosystem CARL?FF Project, together with existing conservation areas, will protect all significant, unprotected hardwood hammocks remaining in the Keys, as well as populations of several rare plants and animals. Acquisition of the CARL?FF sites also will protect the coral reefs from the effects of development. ? Management of publicly acquired tracts will be phased in and will involve mainly removing exotic plants, preventing further habitat fragmentation, removing trash and debris, posting and some fencing of the sites, and establishing some basic visitor amenities at selected sites. 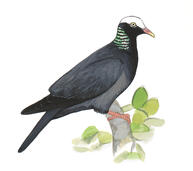