Freezout Lake is a large natural sink surrounded by shortgrass prairie at the base of the Rocky Mountain Front. A large shallow lake dominates the site, which also contains smaller ponds with abundant emergent vegetation. The site is a wildlife management area administered by the Montana Department of Fish, Wildlife and Parks.

Freezout Lake is a premier wetland/prairie complex. More than 200 species of birds have documented. Thousands of waterfowl breed here, and hundreds of thousands congregate during migration. Indeed, recent counts of white geese (Snow and Ross's) in early spring have exceeded 300,000 individuals. A large colony of Franklin's Gulls nest on the main lake, as do Eared and Western grebes. Breeding shorebirds include Long-billed Curlews, Marbled Godwits, and Wilson's Phalaropes. Thousands of migrant shorebirds stop in late summer on their way to wintering areas farther south.

The emergent vegetation and shortgrass prairie are in good shape and should remain so for the foreseeable future. Water levels in the main lake and other wetlands are vulnerable to decreasing owing to irrigation of surrounding farmlands and drought. Heavy metals have been detected in sediments on the site, and waterfowl periodically die from botulism outbreaks.

The entire IBA is a wildlife management area owned by the state of Montana.

Freezout Lake WMA receives the most use in fall, when waterfowl and pheasant hunters congregate here to take advantage of the large blocks of state-owned land open for hunting. Birdwatching is especially popular in late March and early April when hundreds of thousands of waterfowl are present. The site receives little use in summer and winter. 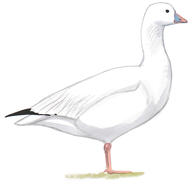