Nestled against the Canadian border in northwestern Montana, Glacier National Park is the centerpiece of the "Crown of the Continent" ecosystem. Much of the park is relatively pristine wilderness where grizzly bears, wolves, lynx, and other top predators still roam the forests and prairies. Alpine tundra, glaciers, mountain peaks, and old-growth forests provide spectacular scenery and support a wealth of biodiversity that makes this site a national treasure.

{link:For IBA map, click HERE then use back button to return to this page.|http://mtaudubon.org/birds/documents/glacierpark.web.pdf}

More than 275 species of birds have been observed in the park. At least 14 species of breeders are of Global (Olive-sided Flycatcher, Brewer?s Sparrow, Cassin?s Finch) or Continental (Dusky Grouse, Bald Eagle, Northern Harrier, Peregrine Falcon, Black Swift, Short-eared Owl, Rufous Hummingbird, Williamson's Sapsucker, Red-naped Sapsucker, Willow Flycatcher, and LeConte's Sparrow) conservation concern. Recent numerical data are unavailable for most of these species, but for two of them, Olive-sided Flycatcher and Cassins's Finch, numbers are sufficient to qualify the park as an IBA of Global significance.

Glacier Park is the only known nesting area for Northern Hawk Owls in Montana and is one of only a handful of breeding sites for the species in the lower 48 states. It is also one of the best places in the state to find nesting Harlequin Ducks and White-tailed Ptarmigan.

The park receives nearly two million visitors each year, although many of them do not wander far from roadways and other developed areas. Nonetheless, individuals of many species likely are displaced from nesting and foraging areas where humans congregate. Owing to global warming, the park's glaciers are melting. As glaciers disappear, flow rates in rivers and waterfalls will decrease, which likely will reduce numbers of nesting Harlequin Ducks, Black Swifts, and other species that rely on these habitats. Wildfires have burned over vast areas of the park in recent years. On the one hand, fires create habitat for species such as Northern Hawk Owls and woodpeckers. On the other hand, they reduce habitat suitability for species requiring large blocks of live coniferous forest. Blister rust has led to increased mortality of whitebark pines in the higher elevations, which could influence numbers of Clark's Nutcrackers that feed on the seeds.

The park is owned by the National Park Service except for 301 ha of private inholdings (0.07%).

Coniferous forests dominate Glacier?s landscape, the tree species changing depending on aspect, precipitation, and elevation. The more common species include Engelmann spruce, subalpine fir, lodgepole pine, Douglas fir, western red cedar, western larch, and western hemlock. Whitebark pines grow at higher elevations; many have been killed by blister rust, a non-native fungus. Black cottonwoods and quaking aspens are the more common deciduous trees at lower-elevation riparian areas. Above the forested mountain slopes, alpine tundra prevails, with grasses and small forbs eking out an existence in a region that enjoys only three months of the year without snow cover. 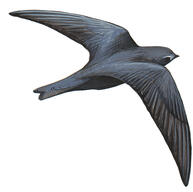