The state owned portion of the preserve is in the Ansley area. The University of Mississippi owns about 500 acres. The area around Port Bienville is mostly owned by Hancock County. The rest is privately-owned.

This IBA is characterized by extensive saltmarshes interspersed with long, narrow forested ridges (cheniers). The marshes, dominated by Black Needle Rush and Saltmeadow Cordgrass, provide habitat for permanent residents such as Clapper Rails, Marsh Wrens and Seaside Sparrows and winter residents such as Yellow Rails and Nelson?s Sharp-tailed Sparrows. The forested ridges, mostly dominated by Live Oak and Slash Pine with relatively open understory, provide critical stopover habitat for long-distance migrant landbirds such as vireos, warblers, tanagers, orioles and buntings. This site is also divided by numerous bayous and shallow ponds, areas used by water birds such as ducks, herons and egrets. Bald Eagles are frequently seen, although they are not known to nest at the site.

This site, as well as others in the Mississippi Coastal Preserves Program, is protected and managed as a natural area in perpetuity. Efforts are under way to control or eradicate non-native plant species such Chinese Tallow and Cogon Grass, which are invading upland areas and restricting habitat available to landbirds. Failing septic systems in nearby housing areas and illegal dumping of construction debris and other trash pose threats to water quality and diminish the aesthetic appeal of the preserve. This site is used for both consumptive and non-consumptive recreation, including hunting, fishing, paddling and bird watching. Motorized vehicle access to cheniers has been limited to protect native vegetation. Numerous Indian shell middens are scattered throughout the site. Aside from being historically valuable, the middens contain unique plant communities.

The state owned portion of the preserve is in the Ansley area. The University of Mississippi owns about 500 acres. The area around Port Bienville is mostly owned by Hancock County. The rest is privately-owned. 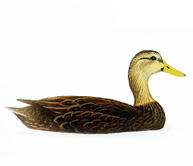