This site includes a large area of northern hardwood and mixed forest
along and atop the Helderberg Escarpment; it is administered by NYS
OPRHP. Jefferson and spotted salamanders migrate in spring from
below the top of the escarpment to the ponds in the center of the park.
The escarpment contains world-renowned fossil beds and provides
spectacular views of the valley.

This site is listed in the 2002 Open Space Conservation Plan as a
priority site under the project name Helderberg Escarpment. Portions
of this site have been designated as a state Bird Conservation Area.
Residential and other development in areas immediately adjoining the
park may increase fragmentation and predation by human-associated
predators, including cats and raccoons. 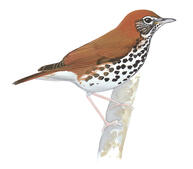