Globally important site for Bendire's thrasher. In 2012 a survey of 32 point count stops in the style of the BBS, but one month earlier, yielded 13 detections of Bendire's thrashers. These results led to more exploration of the area and a conclusion that the habitat may be ideal for this species. A formal IBA expedition with Arizona Field Ornithologists was planned for 2013. Point count surveys using tape play-back were conducted
April 27-28, 2013 along 12 routes and Bendire’s Thrashers were detected
on 11 of those routes with a total of 35 individual adults detected and 10
instances of breeding pair territories including a nest with 3 nestlings found. Surveys were repeated in April, 2014 covering additional areas within the proposed IBA. The results of the April 12 and 13, 2014 effort yielded 59 individual birds and of those there were 19 confirmed pairs.

This is a fascinating area personified by many biotic zones meeting and overlapping in this geographic area. The result is a habitat unlike any other in the state in terms of habitats and the unique mix of bird species associated with these habitats. There are 10 species of conservation status found in this proposed IBA out of 78 total species of bird recorded on surveys. The motivating factor for this area to be surveyed in the first place was the unofficially noticed presence of Bendire’s Thrashers, a species of Global IBA status. Species-specific call back surveys were conducted April 27-28, 2013 along 12 routes and Bendire’s Thrashers were detected on 11 of those routes with a total of 35 individual adults detected and 10 instances of breeding including a nest with 3 nestlings found. This is a number high enough to qualify this area as a Global IBA if it is first identified as a state-level IBA as a result of this nomination. As part of the 2013 survey expedition nocturnal call-back surveys were also conducted and Elf Owl (59 total detected), Western Screech-Owl (19 total detected), Common Poorwill (20 total detected), Lesser Nighthawk (35 total detected) and Great-horned Owl (5 total detected) were all recorded over two nights of surveys. This area is also excellent for Costa’s Hummingbirds (total of 28 detected, high of 2.48.km) and surveyors reported hearing the distinctive sound of their courtship display. With saguaros also being present alongside the Joshua Trees that are the signature plant species for this area it is no surprise that Gilded Flickers (total of 10, high of 1.33/km) and Gila Woodpeckers (high of 1.6/km) were found by surveyors. A species that was found in surprisingly high numbers was Lucy’s Warbler (total of 53, high of 8/km) as there were almost no Mesquite Trees (with which this species is normally associated) present but this species was observed nesting in cavities in Joshua Trees within the proposed IBA. The presence of California Juniper trees may explain the abundance of Juniper Titmice (total of 24 detected, high of 2.24/km) seen by surveyors, often in small foraging flocks. Loggerhead Shrikes (high of 0.62/km and 5 detected on 2006 Wikieup BBS route) and Canyon Towhees (high of 0.75/km) were detected in limited numbers but wintering Brewer’s Sparrows (total of 635, high of 68.4/km) were found in extremely large groups and exuberant, noisy flock behavior was observed by surveyors. Other species detected that show this area to be excellent desert habitat include: Cactus Wren, Ladder-backed Woodpecker, Ash-throated Flycatcher, Black-throated Sparrow, Scott’s Oriole (associated with yucca) and Phainopepla (associated with mistletoe). Surveyors also encountered spring migrants such as: Western Tanager, Plumbeous Vireo, Wilson’s Warbler, Virginia’s Warbler, Bullock’s Oriole and Lazuli Bunting. All of these species were seen taking advantage of the abundantly flowing vegetation and cactus during the peak migration time captured by the 2013 survey expedition showing this area to be important for migrants as well as breeders and residents.

The IBA is primarily Bureau of Land
Management owned and is the grazing allotment designated “Chicken Springs.”
There is a small amount of state trust land and private land included in the
IBA. The private owner indicated his willingness to be included in the IBA.

This area was used in the
past for artillery practice for the US military. It is now used sometimes as a
scenic shortcut to Kingman, AZ but is primarily used for grazing of cattle.
This area is also known as an off-road vehicle and ATV recreation area. &nbsp;The area is used 90% for grazing, 10% for
recreation 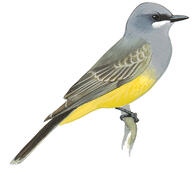