The Kasilof River Flats is a very rich estuarian delta where the Kasilof River meets Cook Inlet. The inland section of this area is riddled with small ponds and sloughs. These areas provide important stopover feeding areas for migrant waterfowl and shorebirds. They also support a healthy breeding area for waterfowl in the summer months. In recent years it has been discovered that the saltwater mud flats on the north bank of the river are critical areas for wintering Rock Sandpipers. At low tide the waterline often retreats over 1 mile out into Cook Inlet, exposing silty muck laden with small clams (Macoma balthica) and polychaete worms (Arenicola species). At high tide the Rock Sandpipers either retreat back up river or out onto floating icebergs near the mouth of the river.

The Kasilof River Flats IBA is threatened by: oil extraction and off-road vehicles.

The Kenai Peninsula is famous for fish and oil. Cook Inlet boasts the first major oil discovery in Alaska and currently there are 16 active oil platforms in Cook Inlet with more likely to be drilled in the near future. Additionally, the peninsula has become a hotbed for recreation as the road access makes it an easy drive from Alaska?s population center in Anchorage. While rock sandpipers are not here in the summer months, people are continually threatening the long term preservation of the beach and protective dunes that are the foundation of the proposed Kasilof River Flats Important Bird Area. Activities like the personal use dipnet constantly encourage more numerous encroachments of vehicles across the dunes and out into the wetlands. These activities are very poorly monitored due to jurisdiction disputes. Additionally, there is a proposal from the State of Alaska to build at least one additional boat launch on the lower portion of the river to encourage power boat use of the lower stretch of the river. It is unknown at this time if an increase in power boat use will threaten the stability of the banks in this section of the river and alter the current sedimentation rates. It is possible that altering sedimentation rates could jeopardize the health of the mud flats that provide winter habitat for Rock Sandpipers.

The ownership of the proposed boundaries of the Kasilof IBA is a composite of 5 different ownership classes as detailed in the table attached. The area is dominated by large parcels of State of Alaska and University of Alaska land. On the fringes there are small pieces of private land and then on the river itself there are a few larger parcels of private land that are generally commercial fish processing plants.

The habitat of this site has two major components. A large rich mud flat that is only exposed at low tide. This habitat is rich with small clams (Macoma balthica) and polychaete worms (Arenicola species) and can extend up to a mile out from the mean high tide line. The other main habitat type is the river and associated sloughs, ponds, and estuarine grassy wetlands.

Overall, the land in this area is undeveloped. There are several large parcels that are developed as fish processing plants and utilized by the commercial salmon industry. The beaches are heavily used for the personal use dip net fishery. During the dip net fishery atv?s and campers encroach heavily on the surrounding dunes and wetlands for recreational riding. Recreational birding occurs in small numbers as well as a minimal amount of waterfowl hunting in the Fall. 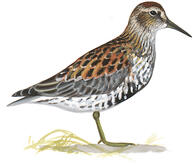