The 203-acre (82-hectare) Kilauea Point National Wildlife Refuge is located one mile north of Kilauea town on the northernmost point of Kauai. The refuge was established on February 15, 1985, when the land around Kilauea Point was transferred to the U.S. Fish and Wildlife Service from the U.S. Coast Guard. The refuge contains Kilauea Lighthouse, built in 1913, three lighthouse keepers? houses, and other historic buildings. The entire 31-acre area of Kilauea Point is on the National Register of Historic Places. The refuge was enlarged in 1998 through donation of the Crater Hill parcel by the Pali-Moana Corporation and by purchase of the Mokolea Point parcel using Land and Water Conservation funds, and again in 1993-94 by purchase of lots in Seacliff Plantation. Kilauea Point was established as a refuge because it has particular value for migratory birds, is suitable for wildlife-oriented recreation and education, and for the protection of endangered and threatened species and other natural resources. The refuge is crescent-shaped and composed of two peninsulas, Mokolea Point on the eastern edge and Kilauea Point on the western edge, connected by steep rocky bluffs that reach a maximum elevation of 568 feet (173 meters) at Crater Hill. These formations are remnants of the Kilauea volcanic vent that last erupted 250,000 to 500,000 years ago. During the winter months the rugged coastline is battered by huge waves that roll across the north Pacific and reach heights of over 50 feet (15 meters). The average monthly temperature ranges from the lower to upper 70?s (?F). Median annual rainfall is about 40 inches (1 meter). Habitats include rocky cliffs and beaches, coastal shrubland dominated by Scaevola sericea, open grassy areas, and upland forest and shrubland composed of naturalized alien species. Kilauea Point is among the most-visited sites on Kauai and is one of the most popular wildlife refuges in the nation, with over half a million visitors per year.

Kilauea Point National Wildlife Refuge is important for the number and diversity of breeding seabirds that it supports and also for the presence of several species that are rare or have restricted distributions. Wedge-tailed Shearwaters are the most numerous species on the refuge, with an estimated 8,000-15,000 breeding pairs. The colony of Red-footed Boobies is the largest in the Hawaiian Islands, with a maximum of 2536 nests counted. About 200 pairs of Laysan Albatross nest on and near the refuge, the largest colony outside the Northwestern Hawaiian Islands. About 350 pairs of Red-tailed Tropicbirds nest on the refuge, as well as smaller numbers of White-tailed Tropicbirds. Kilauea Point harbors at least 4 breeding pairs of Newell?s Shearwater; this is the only easily accessible location where this threatened species nests and the source of most information on its breeding biology. The endangered Nene or Hawaiian Goose was reintroduced to Kaua`i beginning in 1985 and is increasing rapidly. The 300 Nene in the Kilauea Point area is one of the largest concentrations. A remarkable total of 27 seabird species have been observed at Kilauea Point over the years, making it one of the premier sites for seabirds birds in Hawai`i. This list includes some noteworthy vagrants, many of which probably were attracted by the abundance of other seabirds, such as Kermadec Petrel, Red-billed Tropicbird, Lesser Frigatebird, and most recently, White-tailed Eagle in 2006-2007.

The greatest threat to birds at Kilauea Point is predation by non-native mammals. Predation by feral cats, dogs, and rats is a serious threat to all native birds in Hawai`i. Mongoose are not established on Kaua`i, but their arrival would be disastrous for native birds, particularly ground-nesting species such as seabirds and Nene. The entire refuge boundary is fenced on the land-ward side to exclude dogs. Cats and rats are controlled inside the refuge. This management has greatly enhanced bird populations on the refuge. Construction of a predator-proof fence that excludes all species of mammalian predators would further protect native bird populations and would be more cost-effective in the long-run. Other threats include degradation of habitat by invasive alien plants and occasional disturbance from trespassing human visitors. Vehicle traffic can be a threat to Nene that frequent the roadway and parking areas.

Kilauea Point was established as a refuge because it has particular value for migratory birds, is suitable for wildlife-oriented recreation and education, and for the protection of endangered and threatened species and other natural resources. Kilauea Point is visited by approximately 500,000 people per year and is one of the most popular wildlife refuges in the nation. It is estimated that one-third of visitors to Kauai visit the refuge. Areas open to the public include the lighthouse, visitor center and bookstore, the visitor contact station and interpretive area, and the rock quarry area on the east side of Mokolea Point. Portions of the refuge are closed to visitors, including Alabatross Hill, Crater Hill, and Mokolea Point to prevent disturbance to nesting birds and for public safety. Two communications facilities (radio towers) on Crater Hill are operated by Kauai County, the FBI and Verizon through special use permits. 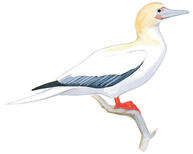