Lake Renwick Heron Rookery Nature Preserve is located just east of the town of Plainfield in northern Will County. The Illinois Audubon Society has called this, "a site of outstanding statewide significance."

The site includes a 200-acre lake with several small islands used for nesting by herons and egrets including Great Egret and Black-crowned Night-Heron.

The lake and islands were once part of a quarrying operation, which created a 320-acre pit.

Development of the site threatened the rookeries, but local citizens got involved. The Illinois Department of Natural Resources and the Forest Preserve District of Will County purchased the land to manage it for the nesting success of wading colonial breeders.

American White Pelicans, ducks and other waterbirds use the lake for resting and foraging during migration.

This site was chosen as an IBA because it met the criteria for Wading Birds.

Habitats consist of a reclaimed quarry lake with several wooded islands and a wooded shoreline. 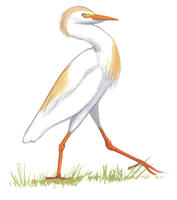