A truly unique (yet nearly entirely un-natural) site, this 7-mile stretch of concrete channel along the Los Angeles River through north Long Beach, Compton and Paramount is one of the most important shorebird stopover sites in southern California. During the summer, a thin sheet of treated wastewater forms in the river channel, and becomes rich with algae and micro-invertebrates that attract shorebirds. An asphalt bicycle path runs along the top of the eastern levee providing excellent viewing conditions that apparently do not disturb the shorebirds, which refuel and rest in the shallower bare spots in the concrete. Although this is a totally human-made environment, it has replaced formerly extensive shorebird habitat once present in the vast marshes along the coast of the Los Angeles Basin (e.g. Long Beach/Wilmington). Plans for freshwater marsh and riparian restoration of the settling ponds just outside the banks of the levees (Dept. of Public Works; California Coastal Conservancy) could substantially improve the area's value for native lowland birds species, particularly in winter, when passerines are crowded into any patch of open habitat in the Los Angeles Basin.

The heat of midsummer coincides with the height of shorebird migration through southern California, and more than two dozen species of sandpipers and plovers have been recorded along this section of the river. Surveys conducted during 1999 and 2000 documented numbers of birds between 8000-15,000 per day between July and October, peaking in August and early September. A substantial number of shorebirds also winter along the channel (e.g. 2000+ Western Sandpipers in January, 2001, pers. obs.) during dry spells (water level rises following even light rains, which temporarily eliminates shorebird habitat). A strong push of waterfowl occurs in fall, with hundreds of ducks, particularly Cinnamon Teal and Northern Pintail, feeding near the Willow St. over-crossing. Peregrine Falcon and White-tailed Kite forage here year round, and a remnant population of Common Ground-Dove persists in the older sections of Long Beach alongside the river.

Recent deaths (2001) of Black-necked Stilts and Mallards (pers. obs.) suggest that avian botulism could be a problem at this site, and more research is needed. Ironically, periodic vegetation clearing (scraping the concrete bottom of the channel) is apparently necessary to maintain the attractiveness of this particular stretch of the river to migrant shorebirds. Of course, this is a unique situation limited to this section, and the rest of the river, particularly the soft-bottomed sections to the south, see their riparian resources seriously degraded by vegetation removal.

This is a 7-mile stretch of concrete channel along the Los Angeles River. Recent plans for restoration of the river could result in eventual restoration of marsh and riparian habitats. 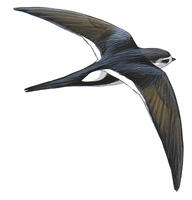