In the center of the southeast quarter of the state, central Harney County. This area is one of the premier sites for birds and birding in the U.S. The refuge consists of over 187,000 acres of habitat which includes wetlands, riparian areas, meadows, and uplands. Refuge lands are configured in roughly a "T" shape, 39 miles wide and 40 miles long.

The avian resources at Malheur NWR are staggering and will briefly be itemized here. Malheur is important to the watch-listed Western Snowy Plover, Long-billed Curlew, Franklin's Gull, Short-eared Owl, Greater Sage-Grouse, Bobolink, and Trumpeter Swan, all of which breed here. The Refuge has one of the highest Breeding Bird Survey counts for the watch-listed Brewer's Sparrow. The refuge's riparian habitat supports the highest known densities of Willow Flycatcher. Malheur Refuge supports up to 20% of the world's population of White-faced Ibis and significant breeding populations of American White Pelican, Cinnamon Teal, Redhead and Greater Sandhill Crane (the latter being 20% of Oregon's breeding population). Up to half of the entire population of Ross' Geese use the Refuge and surrounding private lands during migration. A significant proportion of the total populations of Green-winged Teal, American Wigeon, Northern Shoveler, Northern Pintail, Canvasback, and Ruddy Duck use the area as an important migratory stopover. During migration, the Refuge regularly supports hundreds of thousands of waterfowl. This includes estimates of up to 100,000 Snow Geese, 15,000 Green-winged Teal, 15,000 Mallards, 250,000 Northern Pintail, 250,000 Northern Shovelers, 4,000 Canvasbacks, 2,000 Ring-necked Ducks, 5,000 Lesser Scaup, and 50,000 Ruddy Ducks. Breeding populations on the Refuge include up to 150 pairs of Green-winged Teal, 400 pairs of Northern Pintail, 200 pairs of Blue-winged Teal, 700 pairs of Northern Shoveler, 2,000 pairs of Gadwall, 400 pairs of American Wigeon, 800 pairs of Canvasback, 3,000 pairs of Redhead, 80 pairs of Lesser Scaup, and 2,500 pairs of Ruddy Ducks. Malheur Refuge supports an intermittent breeding population of California and Ring-billed Gulls, but the largest concentrations of these species don't occur until August. Up to 25,000 Ring-billed Gulls have been recorded on the Refuge during that time. Up to 1,300 pairs of Franklin's Gulls have nested at Malheur. Forster's Terns breed on the Refuge, and up to 350 pairs of Caspian Terns have nested in Malheur Lake when water levels are ideal. Up to 6,000 Black Terns regularly nest at Malheur Lake. Harney and Malheur Lakes support the majority of the shorebird population at the Refuge, especially during migration in spring and fall. In migration, concentrations have been recorded of up to 25,000 Western Sandpipers, 350 Pectoral Sandpipers, 35,000 Long-billed Dowitchers, 15,000 Wilson's Phalaropes, 15,000 American Avocets, and 200 Black-necked Stilts. The Western Snowy Plover is the most common breeding shorebird at Harney and Stinking Lakes, and up to 400 individuals have been seen there during the nesting season. From 100 to 600 pairs of Great Blue Herons nest on the Refuge every year in scattered colonies, though mostly around Malheur Lake. Similar numbers of Great Egrets breed on the Refuge. Over 200 pairs of Snowy Egrets have nested around Malheur Lake. The first Oregon breeding record of Cattle Egret also came from Malheur Lake in the mid-1980s, when 1-2 pairs nested for about 3 years. Numbers of Black-crowned Night-Herons vary widely year to year, but generally a few hundred pairs nest on the refuge. American White Pelicans are sporadic breeders depending on water levels in Malheur Lake, and up to 1,500 pairs have nested there. Malheur Refuge is a concentration point in winter for raptors of many species. Over 100 Rough-legged Hawks, 40 Red-tailed Hawks, 60 Northern Harriers, 10 American Kestrels, and 15 Bald Eagles have been recorded on Christmas Bird Counts. About 20 pairs of Golden Eagles are resident and a few pairs of Prairie Falcons are also on the refuge year-round. Malheur doesn't particularly funnel raptors during migration, but the rim of nearby Steens Mountain serves as a regular migration corridor. Malheur is clearly an outstanding migration "trap" with amazingly diverse concentrations of birds. Thousands of birders come to the refuge annually to take part in the spectacle, whether they come for the waterfowl, songbirds, or both. Due to the high birder coverage and concentrated bird habitat Malheur Headquarters may have the highest all-time bird list of any single location in Oregon. 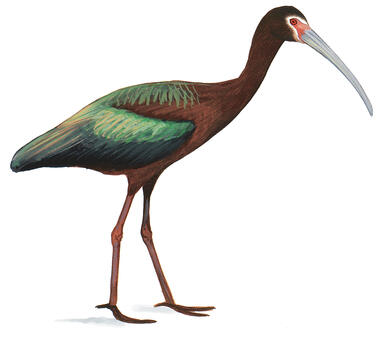