Just seven miles west of New York City and four miles north of Newark, this estuarine complex sits in the middle of one of the most highly urbanized areas in the United States. The Meadowlands District intersects several municipalities across Bergen and Hudson Counties and includes the Kingsland Impoundments, Kearny Marsh, Skeethill Marsh, Sawmill Creek Wildlife Management Area, Richard W. Dekorte Park, Mill Creek, Schmidt?s Woods, Merhof Pond and Losen Slote. A majority of the site is privately-owned and partly regulated by the Hackensack Meadowlands Development Commission (HMDC), a State land-use regulatory agency. One of the priority habitat areas in the Meadowlands is Kearny Marsh, a tidal wetlands complex west of the Hackensack River in the southern part of the site. Other important habitat areas include tidal mudflats, nontidal wetlands and grassland, shrubland and early successional forest on the landfills and scattered around the edge of the Meadowlands. Centuries ago, the area was a large, freshwater Atlantic white cedar (Chamaecyparis thyoides) swamp that has since been transformed by intense development and its associated landfills

Significant Congregations of Wading Birds (B)

The Meadowlands receive a significant amount of contaminants in the form of air pollution, leachates, stormwater runoff and other nonpoint sources of pollution from the surrounding landfills, industrial discharges, power generating plants, sewage treatment plants and sewer overflows. The Meadowlands are under constant pressure from developers to fill the already degraded, fragmented and common reed (Phragmites australis) dominated wetlands for industrial and urban expansion. Despite its condition, the Hackensack Meadowlands remains an important area for birds and maintains restoration potential. Working with the US Environmental Protection Agency, US Army Corps of Engineers, National Marine Fisheries Service/National Oceanographic and Atmospheric Administration, and the New Jersey Department of Environmental Protection, the HMDC developed an environmental program to guide water quality improvement and the restoration and management of wetlands and contaminated lands. The HMDC actively purchases remaining privately-held wetlands and open space and has acquired over 1700 acres to date. The HMDC is also: implementing several wetland enhancement projects that include the restoration of tidal flow to degraded wetlands and eradication of the common reed (Phragmites australis) and purple loosestrife (Lythrum salicaria), creating open water areas with plantings of native vegetation along edges, installing and monitoring Tree Swallow nest boxes. The Hackensack Riverkeeper and New Jersey Audubon Society (NJAS) are engaged in bird surveys and an ecotourism initiative, The Birding and Wildlife Trails Guide. Advocacy groups for the Meadowlands include Hackensack Riverkeeper, NY/NJ Baykeeper, NJAS, Bergen Audubon Society, The Fyke Nature Association, Environmental Defense and the Trust for Public Land. 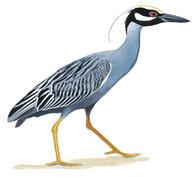