The Miller Beach/Marquette Park Important Bird Area is located in northwestern Indiana just east of the City of Gary, near the boundary of Lake and Porter Counties. The IBA is a conglomeration of different ownerships and properties, all of which can be found at Lake Michigan?s southernmost point. For migratory birds and their habitat, this is a critical position along the Great Lakes migration route, especially during the fall season.

Miller Beach and Marquette Park sit adjacent to one another and are bordered to the immediate north by the deep waters of the lake. Although they are owned by separate entities (Miller Beach is maintained as part of the Indiana Dunes National Lakeshore, and Marquette Park is owned by the Gary Parks Department), combined the two properties compromise about two miles of contiguous beach and dune habitat. Additionally, several large stands of black oaks are dispersed in the southern parts of the 240-acres Marquette property.

To the immediate south of the beaches lies Miller Woods, also owned and operated by the National Parks Service as part of the Indiana Dunes National Lakeshore. This 75-acre property includes oak savanna, interdunal ponds, marsh, high dunes, and lagoons within its confines.

The east-west boundaries of the Miller Beach/Marquette Park IBA are compromised of the developments most associated with the highly urbanized parts of Lake County. To the west sits the large U. S. Steel industrial complex, and to the east of Marquette Park lies a residential area of the Town of Miller.

The location of Miller Beach respective to the surrounding physiography of the Great Lakes region and the property?s complementary habitat make this Important Bird Area one of the most critical sites for migrating waterfowl, shorebirds, and waterbirds in Indiana.

Miller Beach and Marquette Park are located almost perfectly at the extreme southern point of the elongated Lake Michigan waters. Hence, migrating birds following the lakefront in either an eastward or westward direction are funneled to this IBA, especially during autumn?s southbound flights.

During November, for instance, one can find offshore rafts of diving ducks and loons numbering thousands of individuals. Earlier in the fall, the migrant funneling effect also is evident with southbound jaeger and tern species. Daily counts of Common Terns have numbered 4000 individuals in recent years, and jaeger species, despite being quite rare in other locales along the Great Lakes, are present during the months of August through November.

The long sandy beaches at Miller Beach also serve as important stop-over habitat for many threatened species of shorebird. Although they do not nest in Indiana, Piping Plover are a near annual migrant at this site, as are Whimbrel and Red Knot. Each of these species are included on Audubon?s WatchList.

This IBA also includes Miller Woods, a 75-acre parcel of the Indiana Dunes National Lakeshore that comprises mostly oak savanna. Many neotropical species utilize this location as stopover habitat during migration, including such WatchList birds as Wood Thrush, Golden-winged Warbler, and Canada Warbler. The Karner Blue Butterfly, listed as a federally endangered species, also can be found within the savannas of Miller Woods. 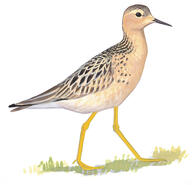