The Montezuma Wetland Complex lies within the heart of the
drumlins region of the New York Great Lakes Plain. Broad, flat basins
interspersed with classic drumlin glacial formations characterize the
area; these oval-shaped hills are generally oriented in a north-south
direction with wetland basins in the valleys. The mix of extensive
marshes, swamps, upland forests, productive agricultural soils, and
varied topography and hydrology create a patchwork of diverse
habitats important to many migratory and resident wildlife species.

The wetland habitats found at this site support an abundance and diversity of wetland-dependent species, including one of the largest migratory concentrations of waterfowl in the Northeast. Over 500,000 Canada Geese pass through the complex each migration period. During
spring migration, 15,000 Snow Geese regularly use the area. In late fall, American Black Duck numbers peak at more than 25,000, and Mallards peak at 100,000. Montezuma is one of the most significant stopover and foraging locations for shorebirds in upstate New York, regularly hosting 1,000 or more individuals of 25 species. Many at risk species breed within the complex, including Pied-billed Grebes, American Bitterns, Least Bitterns, Ospreys, Bald Eagles, Northern
Harriers, Cooper's Hawks, Red-shouldered Hawks, Black Terns, Sedge Wrens, and Cerulean Warblers. In addition, the site supports breeding colonies of Great Blue Herons and Black-crowned Night-Herons, and hosts one of the largest fall swallow concentrations in the state, estimated
at 50,000-100,000 individuals. In 2003 and 2004, the site also supported the first breeding pair of Sandhill Cranes in the state.
Over 500,000 Canada Geese pass through the complex during
each migration; 15,000 Snow Geese regularly use the area;in late fall American Black Duck numbers peak at over 25,000, and Mallards at 100,000.
Great Blue Herons and Great Egrets can reach 70 ind. at May?s Pool.[1]; 213 ind. in 2000 [2];
Mixed species flocks Daily max. of 641 ind. in 2003, 613 in 2002,726 in 2001.

A portion of this site is listed in the 2002 State Open Space Conservation
Plan as a priority site under the project name Northern Montezuma
Wetlands. Portions of this site have been designated as a state Bird
Conservation Area. Land acquisition by USFWS and NYS DEC continues (750
acres within the complex were acquired by NYS DEC in 1997). Additional
land on Route 89 was purchased in 2002 for a grassland restoration project
funded by the Friends of the Montezuma Wetlands Complex in 2004. There are some problems involving runoff
from nearby croplands into the site's wetlands. The invasion of purple
loosestrife (Lythrum salicaria) has been a major problem, but an active
control program by USFWS and NYS DEC has had some success in
decreasing the spread of purple loosestrife and reestablishing common
cattail (Typha latifolia) in certain areas. Audubon New York is scheduled
to open a new Audubon Center at the site in 2006, in partnership with the
NYS DEC, the Friends of the Montezuma Wetlands Complex, and the
USFWS. 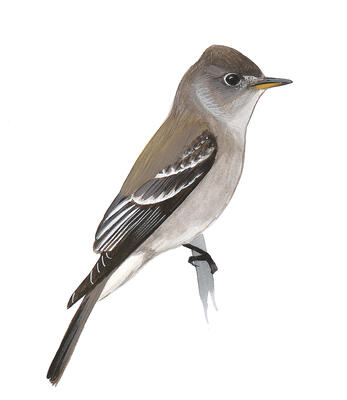