Found near the mouth of Frenchman Bay, Egg Rock is a barren, 12-acre island with a lighthouse dating to 1875.

Best known for its large colony of Herring Gulls, this island also supports breeding Great Black-backed Gulls and Common Eiders. In winter, this site has a significant concentration of Purple Sandpipers.

Human activities have continued to increase in and around the island because of its proximity to Bar Harbor. These activities range from personal watercraft to tour operators to large cruise ships. Human disturbance linked to the recreational use of small watercraft is a constant threat. Potentially more damaging and of a longer-term nature are the threats (i.e., hazardous spill, overboard discharges, and direct disturbance) associated with the increasing number of cruise ships visiting Frenchman Bay, the multiple daily tours provided by commercial operators during the non-winter months, and the continuing high volume of recreational and commercial fishing boats.

The site is currently owned by the U. S. Fish and Wildlife Service, Maine Coastal Islands National Wildlife Refuge, which took ownership from the U. S. Coast Guard in 1999. The island is closed to public access during the seabird nesting season (April 1 ? July 31). 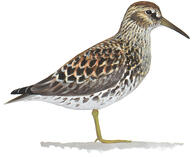