Noxubee National Wildlife Refuge has some of the best bottomland hardwood forest and old growth pine stands in the northern portion of the state.

It is an important site for the conservation and recovery of the federally endangered Red-cockaded Woodpecker. Two lakes on the refuge provide nesting habitat for Wood Ducks and wintering habitat for large numbers of ducks and geese. Herons and egrets use the lakes and associated shoreline and island habitats for nesting as well as post-breeding roosting and foraging. Wood Storks also use the refuge in late summer and fall. A pair of Bald Eagles successfully nested on the refuge in 2003 for the first time since the 1950s.

Much of the refuge is managed for migrating and wintering waterfowl. The upland pine habitat is managed for Red-cockaded Woodpeckers, which requires burning and thinning to maintain open, mature pine stands. In addition to habitat improvements, a major effort has been made to increase the Red-cockaded Woodpecker population by relocating individuals and installing cavity inserts and predator guards. The refuge features an environmental education center that serves hundreds of school children each year. The refuge receives significant attention from the Oktibbeha Audubon Society, the Starkville-based Audubon chapter. Members have been assisting refuge staff with Red-cockaded Woodpecker monitoring and conservation and conducting inventory and monitoring projects for all birds over many years. The refuge is the focus point of a Christmas Bird Count. 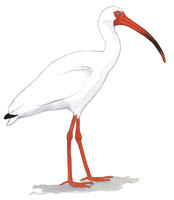