This site includes a series of high elevation forests surrounded by open
farmland. The area is mostly hardwood forest (maple, beech, hemlock),
and in swampy areas, red maple and red spruce stands. According to
the NY GAP land cover data, approximately 85% of the site is forested,
which includes deciduous wetland, evergreen northern hardwood,
evergreen plantation, successional hardwood, and sugar maple mesic
forests. State Route 23 divides the site, with the southern portion
including the New Michigan State Forest, and the northern portion
including the Pharsalia Wildlife Management Area?the first WMA
established in New York. Much of the land is abandoned farmland
that was purchased by the state in the 1930?s. The site is popular for
hunting, hiking, skiing, and snowmobiling.

The NYS DEC manages the site for multiple uses. Portions of this site
have been designated as a state Bird Conservation Area. The area is in
great need of bird inventory and monitoring. 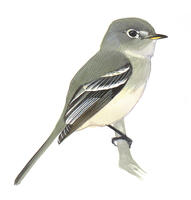