This site includes Port Angeles Harbor, Ediz Hook, and shallow marine waters immediately north and west of Ediz Hook. The eastern boundary is a line from the mouth of Lee???s Creek, running northwestward to a point 450 meters east of the tip of Ediz hook, where it intersects the 200-foot depth contour. The northern boundary follows the 200-foot depth contour until it intersects a line running due north from the point where the hook joins the mainland. This north-south line forms the western boundary. Port Angeles Harbor is the deepest harbor on the U.S. west coast, with depths up to 50 meters. It is protected from the open marine waters by Ediz Hook, a 5 km-long spit comprising about 80 hectares of sand/gravel beach and rocky breakwater. The port is highly industrialized and modified by human influences. It contains more than 100 pilings, and rafts of logs waiting export or use by nearby mills. The site contains large shipping facilities, a marina, and commercial net pens.

Despite the intense human use, the sheltered waters behind Ediz Hook are an essential roosting and foraging area for wintering and migrating waterfowl and other aquatic birds, especially during periods of severe weather. Floating logs and pilings are preferred roosting habitat for herons, gulls, shorebirds, and Bald Eagles. Gull numbers often reach into the thousands. The site regularly supports more than 100 wintering Great Blue Herons. The Harbor supports the largest wintering concentrations of Barrow?s and Common Goldeneyes and Harlequin Ducks on the northern Olympic Peninsula. Waters immediately offshore outside the hook support significant feeding concentrations of alcids, gulls, and sea ducks throughout the year. The harbor supports large post-breeding dispersal flocks of Heermann?s Gulls and migratory populations of Thayer?s Gulls.

Threats to this site are largely undocumented and poorly understood. Further research should be conducted in this arena. 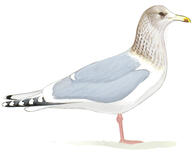