Prairie Ridge State Natural Area is the only large grassland habitat in the entire Southern Till Plain Natural Division of Illinois. The area, located near the town of Newton in southeastern Illinois, lies in two non-contiguous counties -- Marion and Jasper.

This wildlife area represents the only remaining place east of the Mississippi River where the Greater Prairie-Chicken can be found on historical grounds. The first part of this sanctuary was purchased in 1961 to arrest the decline of this species. Further land acquisition has brought the site to roughly 1,700 acres in Jasper County alone.

Two landowners, the Illinois Department of Natural Resources and the Illinois Audubon Society, work in partnership to manage the site. Adjoining landowners of agricultural property sometimes participate in research projects.

The natural area also provides habitat for five species of rail, including Yellow, during migration.

Grasslands comprise most of the reserve, with some deciduous forests and marshlands. 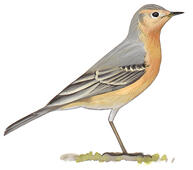