Prettyboy IBA is a forested corridor flanking the Gunpowder Falls river for 25km from Roller in Carroll County to Blue Mount in Baltimore County. It includes the largest contiguous forest block in Baltimore County and one of three large reservoirs that provide the City of Baltimore with its water supply. The predominant habitat is mature oak-hickory forest. There is a fairly dense understory of mountain laurel on the steep valley slopes immediately above the river but on the higher slopes and ridges overbrowsing by deer has removed much of the shrub layer. The great majority of the site consists of two large protected areas, the Hereford Area of Gunpowder Falls State Park, owned and managed by Maryland DNR, and Prettyboy Reservoir CWMA, owned and managed by the City of Baltimore. The site also includes small areas of private lands around the periphery of these properties, and larger private lands downstream of the state park. The majority of the Hereford Area of the Gunpowder Falls State Park is a State-designated Wildland.

Prettyboy IBA hosts a diverse avian assemblage of Forest-Interior Dwelling Species (FIDS). These are birds defined by Maryland DNR as requiring large, intact patches of forest habitat. 20 species of FIDS breed regularly at the site, of 25 potentially regular species in the maryland portion of BCR 29 (Piedmont). Mean number of FIDS per Breeding Bird Atlas block recorded in the 2002-06 Atlas project = 16.67 (n=6 blocks). This is the 84.8th percentile of blocks in BCR 29; 15.2% of atlas blocks in BCR 30 supported >16 FIDS.
Some FIDS, such as Broad-winged Hawk and Cerulean Warbler have declined greatly in recent decades. Bird Blitz surveys organized by the Baltimore Bird Club in 2007 found good numbers of Louisiana Waterthrush and Worm-eating Warbler. 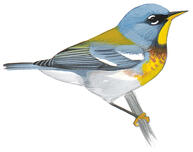