Quehanna Wild Area is an extensive forest area set aside to maintain the undeveloped character of the forest environment. The tract was originally state forest land that was sold and leased to the Curtis Wright Corp. for jet engine and nuclear research in 1955. It was returned to the Commonwealth in 1966. The forest has been influenced by Oak Leaf Roller and Gypsy Moth and experienced tornado damage in 1985. Timber rattlesnake, Black Bear, and elk rely on the varying forest types and low human density for prime habitat. Wykof Run Natural Area supports stands of pines and hemlock that add to the diversity of vegetation and birds.

Threats to the area include over-grazing by deer and natural pests like the Gypsy Moth. The area contains part of the popular Quehanna Trail and is used by hikers and backpackers. Designated by DCNR as a Wild Area - set aside to maintain the undeveloped character of the forest environment. There is restricted land use: no new public access roads, no off-road motorized vehicles, no commercial harvests, no new camps allowed. salvage logging is still permitted. DCNR maintains fix-up areas with insect mortaility, regenerates areas to higher quality canopy forest, maintains deer fencing, and conducts elk studies. 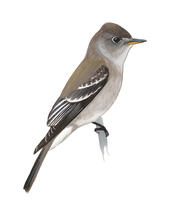