Rankin is composed of islands and floodplains that are submerged during the warm season impoundment of Douglas Reservoir. In late spring, summer, and early fall, the area consists of mudflats, open shallows, and both inundated and dry floodplain forest. The area is approximately 65% open, treeless floodplain; 25% black willow/buttonbush/cottonwoods; and 10% mid to late mixed floodplain forest. Virtually the entire area is under 1'-15' of water from mid-May through July. Maximum ground exposure lasts roughly from mid-October until late March. The amount and proportion of habitats vary with the reservoir level. Lake elevation ranges from about 995' to about 950'. Migratory shorebird habitat is most extensive from 988 to 978'; no mudflats are found above 992'.

This is the premier site in East Tennessee for warm season waterbirds including Wood Duck, Double-crested Cormorant, Great Egret, Osprey, shorebirds, Cliff Swallow, and Prothonotary Warbler. In winter, permanent water features provide waterfowl habitat. In all, there have been a total of 89 waterbird species documented.
Over 100 (maximum 270) Great Egrets have roosted nightly at Rankin 2000-2005. Nuptial plumage displays and stick carrying were observed in 2003 and 2005, but more conclusive evidence of breeding has not been reported.
During the warm seasons, Rankin Bottoms holds and attracts full complements of species dependent on mudflats and forested wetlands. There are 3 active Osprey nests within the wildlife management area and several additional ones nearby. Bald Eagles appear regularly, as many as 3 in one day.
Waterfowl (ducks, geese, and swans) number into the 100's during the winter. Year-round there are 100+ Canada Geese, Mallards, and Wood Ducks combined with larger numbers during the migration periods and winter. About 80 Wood Duck nest boxes are maintained in the Rankin WMA, with flocks of over 100 individuals being observed during the breeding season and 300 individuals during migration periods.
Thirty-four species of shorebirds have been observed. Rankin typically has the highest number and variety of migratory shorebirds in the eastern half of Tennessee. Maximum numbers of selected species include Lesser Yellowlegs (85), Semipalmated Sandpiper (400), Least Sandpiper (450), Pectoral Sandpiper (500), and Short-billed Dowitcher (125).
In excess of 4,000 swallows of four species were observed roosting in late summer 2003. Over 1,000 Tree Swallows were present June 26, 2005. Tree and Cliff swallows nest in the area. Five hundred and fifty nests and over 1,000 individuals of Cliff Swallows were observed in 2004 and 750 active nests and 1,000+ individuals in 2005. Nests were first recorded at this site in 2001.

60% is managed by TWRA, but is owned by the Tennessee Valley Authority. The remaining area is owned by a private company and private landowners. 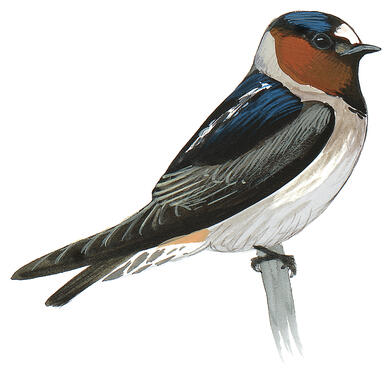