Situated on Murdock Hill, near the mouth of the Menunketesuck River at the junction of Gatchen Creek, Salt Meadow Unit serves as the visitors center and headquarters of the Stewart B. McKinney NWR. This former estate is owned by the USFWS. It contains habitats ranging from Spartina patens-dominated high -salt meadow- marsh to mature deciduous forest with some areas of upland fields, scrub and young deciduous forest. Some of the habitat is managed to provide a variety of second growth stages for diversity of habitats.The prime ornithological importance of the area is as a migratory stopover for Neotropical migrant landbirds, with fall migration being the most important season. The woodlands, shrubland, and marsh also provide nesting habitat for some species of special concern, Audubon Watch List, and Partners in Flight (PIF) high conservation priority species. The site has been the subject of year round point counts for several years and provides opportunity for research and public education. There is additional forest and marsh habitat adjacent to the refuge, including a large area on the opposite side of I-95 (The Ledges).

The area is one of the most important fall migratory stopover areas for Neotropical migrant landbirds in Connecticut providing important habitat for many species of migrant songbirds. At least 29 species of warblers have been recorded in fall migration. Quantitative studies of landbird usage in fall migration should be conducted, but observations indicate that the area is an important stopover and foraging area for these birds. Undeveloped coastal areas have been shown to be important for this purpose. The nesting population of Saltmarsh Sharp-tailed Sparrows (tied with Piping Plover as highest conservation priority species by PIF in our area) may be enough to qualify this site, but when the importance of the area as a migratory stopover is added in, the choice becomes much clearer. This location serves as an island of forest on an otherwise highly developed coastline. There are also several other high conservation priority species that nest on the property. The marsh provides foraging habitat for long-legged wading birds in the nesting, migration, migration and dispersal seasons. Habitat types of relatively unfragmented coastal forest, scrubland and high salt marsh are extremely rare in Connecticut. To catch the landbird migration on the right autumn morning is a wonderful experience matched by few areas in the state. 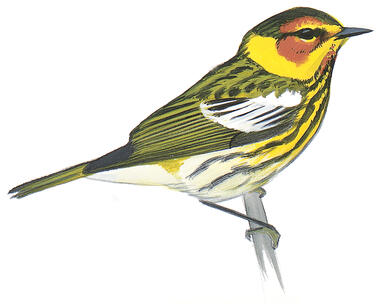