This site encompasses approximately 10,000 acres between Cayuga
and Seneca Lakes in the Finger Lakes region. Having formerly been
maintained as a military base, much of the area is successional habitat.
According to the NY GAP data, approximately 80% of the site is shrub
habitat, which includes old field/pastures, shrub swamps, successional
hardwoods, and successional shrubs. The site also has extensive forest
and some wetland habitat, and supports a population of white deer.

This site is currently owned by the Seneca County Industrial
Development Authority and ownership is expected to be transferred
in the near future. Efforts to conserve the shrub/early-successional
forest habitats at the site are strongly encouraged. 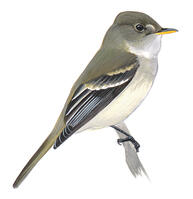