The Swanson Lakes IBA is located at the north end of the Kenai Peninsula, about ten miles south of Anchorage across Turnagain Arm. The terrain is generally a flat to gently undulating topography of ancient glacial deposits. Lakes are the most noticeable feature; hundreds of lakes are scattered throughout the IBA. They drain into either the Moose or Swanson Rivers, which are both shallow streams that meander through poorly-drained swamps and muskeg flats. Surrounding the lakes are rounded hills and ridges rising up to a maximum of 295 feet in elevation.

Although not abundant, Trumpeter Swans are found throughout lakes, streams, and ponds of this IBA. A small number of swans overwinter at the outlet of Skilak Lake during mild winters. Swans are very sensitive to disturbance and may have an unsuccessful breeding season if high levels of human activity occur near their chosen nesting site; this wilderness IBA provides important protected habitat.

Red-throated Loons, an Audubon Alaska WatchList species of conservation concern, is present at the IBA but does not meet qualifying criteria. The Kenai NWR, with it's hundreds of lakes and ponds, has one of the highest densities of nesting Common Loons in North America.

The Kenai Refuge has an ongoing biology program that encourages and supports research projects on the refuge. Banding and telemetry studies have documented local movements of swans among lakes on the Refuge, and their migratory movements to British Columbia and northwest Washington state where many overwinter. 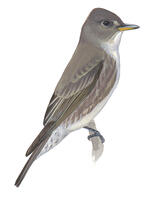