Tamarack Swamp is situated at the head of Drury Run in Clinton County. From Renova, it is reached by following Route 144, which skirts the western edges of the swamp. Francis R. Cope published in 1925 his "Observations on the Summer Birds of Parts of Clinton and Potter Counties, PA." He described Tamarack Swamp as,"a little oasis in the desert - the dense growth of hemlock, spruces and balsams and other heavy foliaged trees keeps out the hot rays of the summer sun and affords a cool retreat for both birds and plants - everywhere we find beautiful beds of sphagnum moss -one sees little pools of icy water collected around the roots of trees - we find many birds typical of the Canadian fauna such as Brown Creeper, Winter Wren amd many of the northern forms of warblers.

The destruction of the conifers is/was one of the most serious environmental changes to occur in this area. Despite these losses, there seems to be no absolute evacuation of all boreal species at and near tamarack. However, many of the species that Cope reported 75 years ago are gone.Most notably are: Olive-sided Flycatcher, Brown Creeper and Winter Wren.

Public acquisition, enforcement of regulations governing destruction of wetlands and public education would help preserve this unique area. Restriction of logging, ATV use and other consumptive recreational uses would limit damage to the fragil habitat. 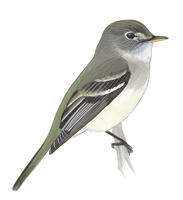