Tara Wildlife is the largest private IBA in the state. While managed primarily for consumptive recreation, Tara maintains open fields, forested wetlands, and ponds for waterfowl.

Tara harbors significant concentrations of post-breeding waders; including species of conservation concern such as Wood Storks, Roseate Spoonbills, White Ibis, and Little Blue Herons; in the naturally flooded habitats of the batture lands or those lands west of the mainline Mississippi River levee. In late summer, storks and other waders are attracted to the drying pools where fish become trapped. Large numbers of waterfowl; including Mallard, Northern Pintail, and Ring-necked Duck; winter on managed impoundments, oxbow lakes, and borrow pits. One Bald Eagle pair has nested on and around Tara since the early 1980s, making it one of the most consistently used nesting territories for this species in Mississippi since the ban of the pesticide DDT in the early 1970s. In addition, small numbers of ospreys nest at Tara. Species frequently found along the Mississippi River; including Warbling Vireos, Baltimore Orioles, Mississippi Kites, and Painted Buntings; are regular nesters.

The primary focus of management is on providing habitats for hunting of White-tailed Deer, waterfowl, and doves, among other species. Much of the property has been enrolled in conservation easement programs to protect it from clearing and development, and cleared sites are being reforested. More recently, Tara has expanded its operation to include such events as the annual Stork and Cork Birding Festival, which coincides with late summer movements of wading birds along the Mississippi River. Annual youth camps have exposed participants to a variety of conservation-related education activities. Groups that influence conservation management in the state meet at Tara?s conference center include the Mississippi Wildlife Federation, Lower Mississippi Valley Joint Venture, the regional Black Bear Conservation Committee, Mississippi Ornithological Society, Sierra Club, Ducks Unlimited, and the Mississippi Department of Wildlife, Fisheries and Parks. Project WILD and many nature-based school tours are regular features at Tara. 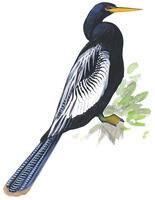