The Turquoise Lake basin lies within Lake Clark National Park and Preserve on the west slope of the Neacola Mountains of southwestern Alaska. The 8-km-long by 2.5-km-wide lake is located 763 m above sea level and is one of a series of glacially-formed, east?west oriented lakes whose moderate to steep-sloping valley walls include remnants of the most recent series of recessional Late Wisconsin glacial moraines. From the surface of Turquoise Lake these stair-step moraine terraces rise an additional 240?640 m onto gently rounded plateaus.

Information from several studies over the past 10 years points to the importance of this montane area as nesting habitat for a unique assemblage of birds, most notably several medium- to large-sized shorebirds and several passerine species. Species known to breed in the area include American Golden-Plover, Surfbird, Wandering Tattler, Baird?s Sandpiper, Gray-crowned Rosy-Finch, and Northern Wheatear. Enough data and anecdotal observations have been collected to suggest that this region represents not only a major breeding range extension for most of these species but also supports significant numbers of each. Recent regional and national shorebird conservation planning efforts [1] have identified certain shorebird species (including many of the above species) and habitats as being of high conservation concern, primarily due to documented or perceived population declines and/or restricted distributions.

Offsite industrial developments such as the Pebble Mine near Iliamna are likely to adversely affect this area though increased human visitation, aircraft over flights, and atmospheric deposition of pollutants. The Turquoise Lake Basin is within a U.S. Air Force MOA. Non-native invasive plants have been introduced on private inholdings at Twin and Telaquana Lakes and may be spreading. Manifestation from global climate change include drying of alpine tundra wetlands, accelerated expansion of dwarf birch and alder into subalpine zones, and altered patterns of phenology including duration of winter snow cover, dates of insects emergence, and length of growing season.

Dwarf shrub-lichen mat tundra dominates the landcover of the area and is characterized by dwarf shrubs, lichens, and herbs. Non-vegetated substrates include scattered boulders, stones, and patches of unvegetated gravel and clay. Dense stands of Dwarf Birch and sometimes Marsh Labrador Tea up to 0.5 m high are common at the bottom and lower slopes of the basin (up to 900 m); most drainages and wet areas at the base of terraces are lined with willows, some 1- to 4-m tall in the most prominent drainages. The driest places, usually crests of moraines and edges of terraces, are covered with mat- and cushion forming plants, dwarf willows, sedges and forbs. At higher elevations (900?1,200 m) areas of tundra and bare ground occur in patches with bare ground comprising about 40% of the surface; however, tundra becomes more sparsely vegetated and bare ground more gravelly with increasing elevation. At all elevations boulders and rock fields are common.

The mission of Lake Clark National Park and Preserve is to preserve and protect the park?s natural and
cultural resources while providing for traditional use, inspiration, recreation, subsistence, and scientific
study for the enjoyment and benefit of current and future generations. 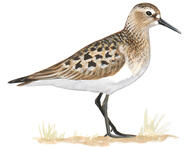