This site merges three existing Vaux?s Swift IBAs, Monroe Wagner Elementary School (4562), Joint Base Lewis McChord Building 2068 (4563), Selleck Old Schoolhouse(4138) and another site not previously entered, Old Northern State Hospital.
Monroe Wagner: This site is an important, traditional Vaux?s Swift communal migratory roost site. It is a decommissioned 4x4 double course brick chimney rising 31 feet above a second story roof. It is part of an active elementary school of 600 students.
Joint Base: Site is another Vaux?s Swift communal migratory roost site. It is a decommissioned 4x4 double course brick chimney on Joint Base Lewis McChord property. The military is aware of the swifts and presently sympathetic to their conservation.
Selleck: This brick chimney is attached to a large two story wooden structure that years ago was a public schoolhouse and is now a private residence. This site is a historic large number Vaux?s Swift migratory communal roost site. The current data that our Vaux?s Happening project has compiled shows it as one of the ten most significant known roost sites for this species in North America.
Old Northern State Hospital: The place was built as a Western Washington State Mental Health institute in 1909. The descriptive term for such a facility at that time was ?Insane Asylum?. Its 225 acres, including a working farm, was closed in 1973. In 2011 the site was listed on the National Register of Historic Places and is now partly occupied by a few non-profits and government agencies. The decommissioned power plant has a large poured concrete smokestack that has hosted large numbers of Vaux?s Swifts for an unknown period of time.

Joint Base: This site is a Vaux?s Swift communal migratory roost site. It is a decommissioned 4x4 double course brick chimney on Joint Base Lewis McChord property. The military is aware of the swifts and presently sympathetic to their conservation.
Old Northern: Vaux?s Swift are able to cling but not perch, and require a rough vertical surface on which to roost in the evening. To lessen the thermal stress of cool evenings, this species will ?huddle? together to share body heat, hopefully out of the wind and rain. Recent unpublished Vaux?s Happening research shows that in the middle of the night, large brick chimneys can be 25 degrees F warmer than outside, without swifts. Large hollow trees were their natural roost sites, but as old growth was removed the swifts were able to substitute man made structures, especially chimneys. The chimneys that work best are those constructed before 1940 when fire codes allowed for all brick construction. As these brick structures age they become safety hazards and are torn down. This has concentrated the swift population into the remaining sites. There have been instances when the birds have attempted to use a chimney that is functional, tempting a high mortality if the heat comes on. In May of 2012 at least 1350 Vaux?s suffocated on fireplace ash when they attempted to roost in a residential chimney on Vancouver Island. The smokestack at Northern State is one of only a dozen remaining, documented large number Vaux?s Swift communal migratory roost sites on the Pacific Flyway. This roost site, unlike some further south, hosts large numbers during the spring migration. On their migration north the swifts are more likely to encounter more severe weather than in the southbound. Northern State is only 50 KM from the Canadian Border and represents perhaps the last safe and warm shelter for large flocks of the species before they reach the old growth nesting areas of British Columbia. Vaux?s Happening estimates that the world migratory population of Vauxi vauxi is far fewer than the PIF estimate of 690,000. Using three different methods our September population estimate is 250,000. Old Northern State is one of only three sites on the Pacific Flyway that has documented over 200,000 single migration roosting events.

Monroe F. Wagner School: Abandonment, Infrastructure: Audubon has confronted the most common threat to this particular site by preventing its demolition. As other sites are destroyed, those that are protected will be even more important. Predator persistence has caused Vaux?s Swifts to seek other temporary roost sites. It has been speculated that guano build up could cause site abandonment.

Joint Base Lewis McChord Building 2068: Abandonment: Structure is currently surplus. Could be torn down.

Old Northern State Hospital: Other, Destruction: When this roost site is swift active it has attracted up to two Merlins per evening. This results in various degrees of swift panic and a small number of individual predations. Of greater concern is that Washington State in an effort to raise revenue has the entire Northern State property currently up for sale. As far as historic significance protection goes, according to the Seattle Times, ?The Department of General Administration would not place restrictions on the owner's use of the property due to the historic designation.?

Joint Base Lewis McChord Building 2068: US Military Base

Selleck Old Schoolhouse: From Seattle times: "It's like keeping an old Model T running," said Tim Schaefer, manager of Selleck Inc., a corporation that owns the former company town. "It's a labor of love." The tidy community of Selleck sits at the end of a winding road in southeast King County, its schoolhouse empty, its community hall used for storage. Most of its mill buildings are gone now, but Selleck had enough of its original self in 1989 to make the National Register of Historic Places. Port Gamble, also owned by a timber company, is the only other former company town in Washington state on that list.

Monroe F. Wagner School: Barren, This is a decommissioned brick chimney that is part of an active elementary school of 600 students.

Old Northern State Hospital: Unset, This is a round, tapering from a five meter base, thirty eight meter tall decommissioned concrete chimney. At the bottom is a huge pile of swift guano that suggests this structure has hosted a lot of swifts for a long time.

Joint Base Lewis McChord Building 2068: Unset, Decommissioned smoke stack for a building that is currently surplus

Old Northern State Hospital: Other, Parking Lot, The Northern State grounds that surround the smokestack are currently used by CASCADE JOB CORPS, which is administered by the US Dept. of Labor. It?s our nation?s largest residential and vocational training program for economically disadvantaged youth. As this often translates into troubled youth, the site is a security area. Audubon and Vaux?s Happening have been able to secure and maintain Cascade Job Corp?s trust for avian observations, but it?s an additional step necessary to obtain swift counts. The immediate area of the smokestack is a little used parking lot. 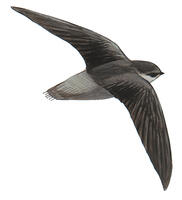