Wassaw NWR, a 10,053 acre migratory bird refuge, supports rookeries for herons and egrets. Wading birds are abundant in summer months. Refuge staff conduct various wintering waterfowl surveys and shorebird surveys throughout the year, including point counts, and assist with long-term research on migratory birds, particularly the Painted Bunting. The Bald Eagle nests annually on one of the outlying hammocks and the endangered Wood Stork can be found feeding in the tidal marshes and waters of the refuge. Numerous shorebirds share the spectacular beaches with nesting loggerhead turtles.

The majority (98%) of Wassaw NWR is deeded to the U.S. Department of the Interior to be managed as Wassaw National Wildlife Refuge.
A small 180 acre parcel (2%) is privately owned by the Parsons Family.

Wassaw National Wildlife Refuge is managed by the US Fish and Wildlife Service. It protects a 10,053 acre migratory bird refuge. There are annual, managed deer hunts and fishing, and general tourism and recreational activities which include boating, birdwatching, hiking and camping. The refuge is open year round, but is accessible only by boat. There are research projects that include Loggerhead sea turtles and the Caretta research project. 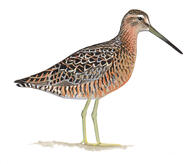