The Wayne NF is located in southeastern Ohio in the foothills of the Appalachian Mountains and is comprised of approximately 239,000 acres. It is administrated in two Districts, made up of three separate, noncontiguous units (Athens and Marietta Units are in the Athens District; Ironton Unit is the Ironton District). Each unit has
an individuality that makes the Wayne appear to be three forests instead of one, each somewhat characterized by their connection to the long history of mineral development. The Ironton area was known for its iron furnaces, the Athens and surrounding areas were extensively mined for coal, and the Marietta Unit is dotted by oil/gas wells.
The Wayne National Forest is the largest tract of public land ownership in Ohio. Its
goal is to manage for all wildlife species through a variety of habitats - forest, wetland, grassland (reclaimed surface-mine), and shrubby fallow field areas. The most common habitat is deciduous hardwood. However, smaller rare areas of vegetation include a remnant tallgrass prairie area known as Buffalo Beats, a bottomland pin oak-swamp white oak community at Paines Crossing, and a post oak barren at Fradd Hollow.
The Ironton District located farthest south is located in Lawrence, Scioto, Gallia, and Jackson Counties. It contains the Vesuvius Recreation Area and is the most developed of the three. The Crown City Wildlife Area (Ohio Department of Natural Resources Division of Wildlife) is the largest continuous grassland in Ohio's southeast Appalachian region's reclamation grasslands (Egypt Valley is larger, in Belmont County farther to the north). This area contains 11,000 acres of reclaimed surface coal-mining operations, much planted to grasslands but also including forested land and dotted with small ponds.

The Bird Survey Routes sourced above cover but a small portion of the Units but are spread out among various habitat types. The Wayne is important for a number of priority bird species, with its large blocks of forest providing strongholds for substantial breeding populations of many Appalachian specialties such as Cerulean Warbler and Worm-eating Warbler, along with Kentucky Warbler, Blue-winged Warbler, Louisiana Waterthrush, and Yellow-breasted Chat, Acadian Flycatcher, Wood Thrush, and Black Vulture. The Cerulean Warbler has been under consideration for Federal Endangered Species listing with the center of its distribution just miles away from the Wayne in Parkersburg, West Virginia. Wetlands found on the Wayne support several heron rookeries and waterfowl.
Surprisingly, on the reclaimed surface-mine lands, the Wayne also has significant populations of grassland specialties such as Henslow's Sparrow and shrubby openings with Prairie Warbler.
With its extensive shrub/scrub and grassland habitat, Crown City Wildlife Area supports the largest known concentrated population of Blue Grosbeaks in Ohio (as many as 5% of Ohio's breeding population, which is expanding in Tuscarawas, Holmes, Coshocton, Lucas, and ButlerlPreble Counties) and more than 2% of Ohio's breeding Henslow's Sparrows. Other significant breeding birds include Northern Bobwhite, Grasshopper Sparrow, Dickcissel, Yellow-throated Warbler, Hooded Warbler, and Orchard Oriole. Territorial Sedge Wrens were present in 2005.

The Wayne is home to the Indiana Bat, a federal endangered species, with both breeding and hibernating sites identified. Several state-listed wildlife species also occur here, such as, the black bear, bobcat, timber rattlesnake, grizzled skipper and Ohio lamprey.
Acid mine drainage continues as a problematic result of surface mining. A very active program has been undertaken on the forest for treating acid water and reconstructing captured streams to allow water to flow above ground and not into voids/mines. Fragmentation of ownership has led to a mosaic ofland management styles. Land is being obtained to consolidate ownership. Fragmentation by the conversion of habitat is problematic such as in road construction (i.e. Nelsonville Bypass, access roads for mineral projects or to private inholdings), and clearing for mineral development projects (i.e. oil and gas operations, coal mining). The succession of openland to forests impacts species preferring each seral stage and non-native invasive floral and faunal species are common. Wetland construction is also an integral part of the Forest Service program. 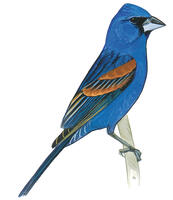