This
Wildlife Management Area lies just across the Savannah River from the Savannah
River AEC Site that has large, undeveloped habitats for many birds.   It is also along the Fall Line with sand
hills.  There are river bluffs of
northern affinity and steep head ravines.

It is a sand
hill site being converted back to longleaf type.  It contains significant  amounts of wiregrass.  It lies along a river bottom corridor.  Mississippi kites frequent the area, and
Bachmann’s sparrows are common.

Yuchi WMA is approximately
7,800 acres, of which over 5,000 acres is in the process of being converted
from off-site loblolly and slash pine to longleaf pine.  Additionally, significant efforts are being
made to restore the remnant wiregrass/forb understory community.  To my knowledge, this is one of the largest
longleaf/wiregrass restoration projects in Georgia.  In addition to its own unique value, Yuchi is
adjacent to Georgia Powers plant Vogle and directly across the Savannah River
from DOE Savannah River Site.  Combined,
this area represents over 215,000 acres of important bird habitat in a single
contiguous block.  On Yuchi, over 20% of
the area targeted for restoration has already been converted to longleaf and
over 1,500 acres are burned annually to encourage herbaceous plant
development.  This early successional
habitat has greatly increased habitat for certain bird species including field
sparrows, Bachman sparrows, bluebirds, indigo buntings and other species.  In 1991, Audubon representatives surveyed
Yuchi WMA and listed Summer tanagers as uncommon in spring and fall and common
during summer,   Prairie warblers as
uncommon, Bachman's sparrows as uncommon and field sparrows as common.  To maintain consistency, I have ranked the
current status of these species as either abundant, common, uncommon,
occasional or rare.  I believe that all
of these species have increased in abundance on Yuchi during the past decade
and estimate that summer tanagers are abundant in spring and summer, prairie
warblers are abundant in spring and summer, Bachman's sparrow is still
uncommon, but present across most of the property in low densities and field
sparrows are common across the property. 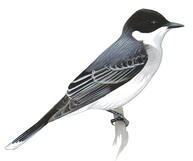