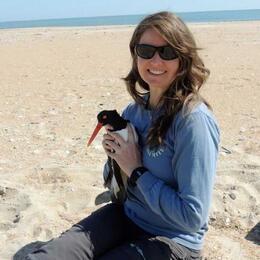 Climate change is the number one threat to birds and the places they need to survive. To address climate change, we need to lower emissions. To lower emissions, we need to invest in clean energy. That’s why Audubon has long supported wind power, provided that turbines are sited responsibly to avoid and minimize harm to wildlife.

While impact on the land chosen for a wind power facility – as well as the impact and cultural consideration to local communities – is critical, there are a lot of other factors to consider. One aspect that has been debated recently is the size of the turbines themselves. Some have argued that a bigger turbine is safer for birds.

One argument is that the larger turbines create more energy, requiring a smaller footprint while generating the same amount of energy as smaller turbines. However, larger turbines also have a larger rotor swept zone, or RSZ. This is the circular area through which the turbine spins, and is the most dangerous area for birds and bats.

While there are some peer-reviewed research articles that documented reductions in bird deaths when newer, bigger turbines replaced older, smaller turbines, there are a few things to keep in mind. For one thing, these studies are over a decade old, so the turbines considered large at the time were much smaller than they are now. Turbines today may be two to three times the size of turbines at the time of the study. Bigger turbines also require taller towers and larger platforms.

This does not suggest that larger turbines are necessarily worse for birds. Turbine size may provide technological and economic benefits related to clean energy production and climate change, independent of direct effects to birds. Larger turbines allow developers to efficiently generate energy in environments in which wind resources may not be available with smaller turbines. Larger turbine size, however, is not itself a method to reduce impacts to birds, and each wind energy project should be evaluated independently based on various factors, including but not limited to turbine size, species present, habitat type, and other emission-reducing measures considered.

Further research is needed to understand how turbine model might influence avian risks. Collision is not the only risk from bird-wind farm interactions. Birds can also experience barrier effects to their migration pathways and displacement from important breeding, wintering, and stopover habitat. Understanding how turbine size might affect birds requires a better understanding of how turbine size might influence these effects, in addition to collision.

A study conducted in Norway that suggested potential benefits to birds from painted turbine blades. In this study, researchers painted a single blade black for each of the four experimental turbines within a much larger land-based wind farm. When compared to control turbines, the painted turbines saw fewer bird collisions overall, though only for some species. Because of the small sample size and scope of the study, researchers considered their work to be preliminary and stressed the need for follow-up work to confirm the value of this method across regions. We are working with our partners in the American Wind and Wildlife Institute to find sites and willing companies to allow the replication of this study.

Responsibly sited wind power is an important part of creating a cleaner future for both people and wildlife. As we move to a more renewable energy grid, we must encourage ever-evolving research to ensure that the measures we take to reduce emissions respect the land, animals, and communities on which they are situated.