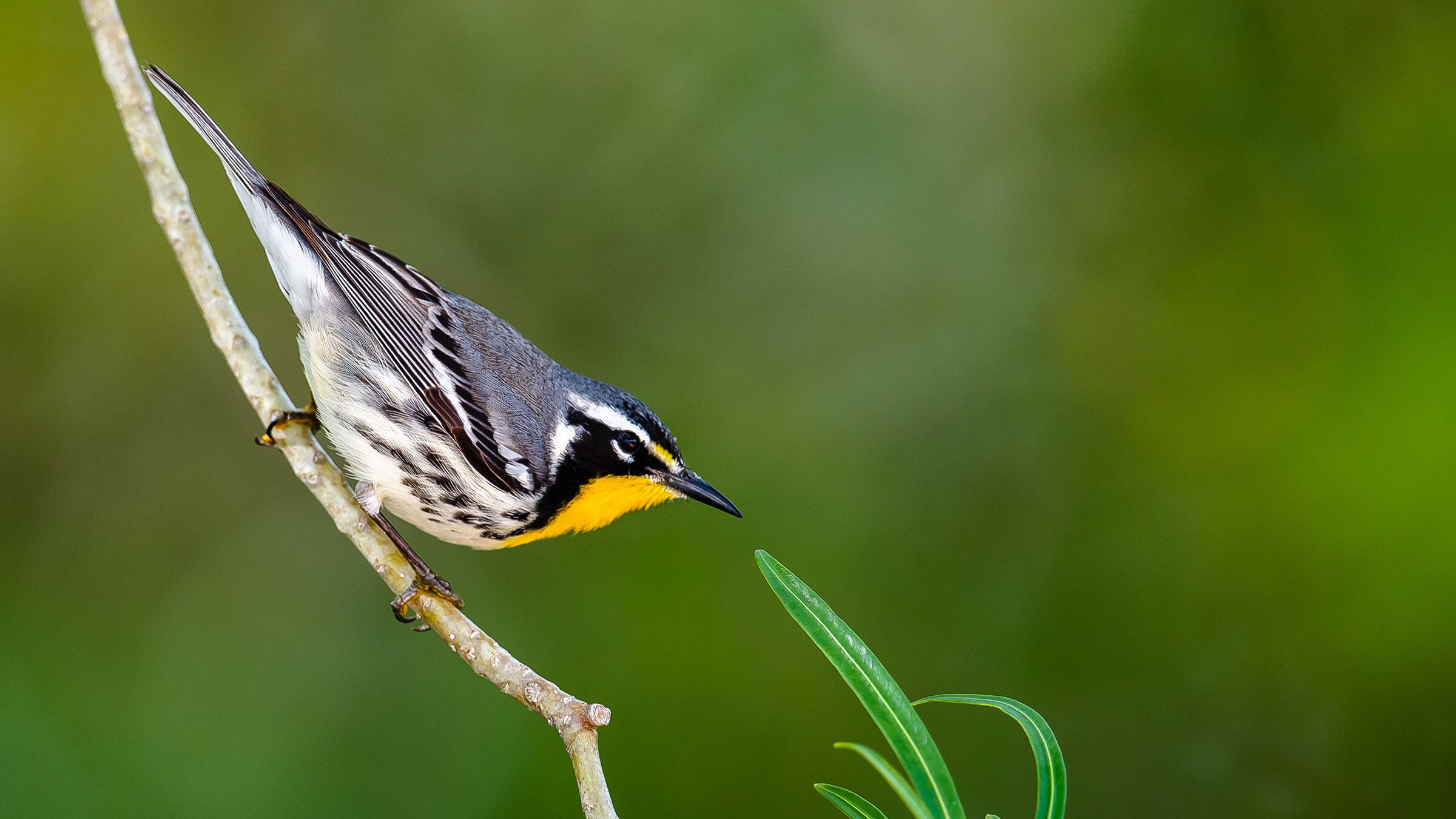 In the morning, we headed to Point Pelee’s sandy tip, where we stood in a clump of chattering birders, our binoculars pressed tightly to our faces as we swung our heads wildly in all directions watching birds come in off the lake—shorebirds at the water’s edge, gulls just offshore, warblers in the bushes, sparrows in the underbrush. There were so many birds of so many kinds that our gaggle of overexcited birders felt in danger of mass hyperventilation.

Except for one man: the Prince of the Point. This guy stood at the back of the throng, hands on his hips (no binoculars!) in a classic Superman pose, seeing birds before anyone else and calling them out to the eager crowd. “Blackburnian Warbler in the low bush!” he’d yell, and the group would twirl in that direction, shutters snapping. At one point he reared back and bellowed “BLACCKK TEERRNNN!” and I almost snapped a vertebrae turning to look for what was then a lifer.

Like a runner preparing for the big race, you’ve got to train yourself now to be ready for the sights and sounds of spring. With a little hard work and lots of practice, any beginner can one day become the prince or princess of their own point.

Know Where to Be

You know the birds are coming, but do you know the best place to see them? Every local birding scene has a favorite spring migration hotspot. Here in D.C. it’s the Nature Center at Rock Creek Park. In Portland, Maine, it was Evergreen Cemetery. In Oxford, Mississippi, it was Rowan Oak. If you can figure out where your local hotspot is, you’ll not only find a lot of birds, but you’ll also likely find a lot of birders who can help with IDs.

What makes a good spring migration spot? There are a few factors. Sometimes the “Central Park Effect” comes into play, where birds migrating over urban areas are concentrated into whatever green spaces are available to them, like city parks. Outside of urban areas, just look for an area with a good diversity of habitat. Food is key, and so the more flowering trees (varied in height), insects, water (shorebirds need shores, of course), and other culinary options available, the more birds you’ll get.

There are a lot of ways to find out about the best locations close to you. First and easiest is just to ask any local birders you know, or visit your nearest Audubon chapter's website, Facebook page, or Twitter account. You can also scour the local listserv for places with good reports.

However, just because a local migration spot is popular doesn’t mean it’s the only place to go. Areas get famous because there can be a ton of birds, but not every species is necessarily represented. In D.C., for example, you’ll never find a Prothonotary or Yellow-throated Warbler in the middle of Rock Creek Park. Instead, you have to head to better riparian habitat along the Potomac. You can use eBird’s “species maps” feature to find areas that might have birds you won’t find at the most popular spots.

Know When to Be There

One aspect of migration that really surprised me when I was a beginner is just how precisely timed migration is for certain species. All the species in Central America don’t just take off at the same time; they’re staggered based upon ancient patterns tied to food and habitat availability. For example, the ability of the Tree Swallow to eat berries allows them to migrate northward earlier than other swallows, all of whom are reliant on a steady diet of insects, which only emerge with warmer weather. Sure enough, Tree Swallows are migrating now, in late March, but we won’t see other swallows in the northeast for another couple of weeks.

There are a lot of resources to tell you with pretty good detail—like, down to the week—when you need to get out birding if you want to see a particular species. Tinkering with eBird’s bar charts and line graphs can give you a plenty of information about peak migration times, and corresponding maps reveal exactly where sightings were made.

Cornell also produces the BirdCast website, which thoroughly forecasts bird migration each spring and fall, accounting for typical species movements and also for weather patterns that drive (or stall) bird migration on a daily scale. It’s a fantastic resource, and it's absolutely something you should consult before deciding which day to tell your boss that—cough, cough—you really think you’re coming down with something and need to take the day off.

It happens more often than I’d like to admit: I show up to my first big migration morning without having studied warblers since the fall, and I just stand there dumbfounded as birds fly by. This year is different. As promised in my column on making New Year's birding resolutions, I’m spending the March doldrums looking at field marks and listening to songs.

For beginners, it's best to start slow and work your way up to the harder stuff. The first bit of training is to remind yourself what the heck all these birds look like. You’ve been stuck for months trying to differentiate shades of gray on the backs of gulls, and squinting to make out field marks on sea ducks bobbing a mile away, but neotropical migrants are a whole different kind of birding.

One of my favorite tools is the excellent The Warbler Guide by Tom Stephenson and Scott Whittle. A couple years old now, The Warbler Guide is still the most comprehensive and user-friendly source for warbler information. Unlike most field guides, this one shows warblers from every angle—including the classic springtime “staring straight up at their underside” look—and in every plumage. Spring migration birding can be frustrating because birds hide behind all those new leaves and keep moving around (argh, this was never a problem in the winter!). This book will help you get ready for identifications based on just a glance.

Plumages are the relatively easy stuff, but songs are where it gets tricky. I have a terrible memory for songs and need a lot of refreshing each spring. The most helpful tool is the LarkWire bird song app. LarkWire is helpful because it offers direct comparisons between songs. A lot of birdsongs you’ll hear in spring sound alike, and LarkWire helps with training by playing up to four similar-sounding songs and asking you to choose which bird it came from. It can be a frustrating game, but it works, and if you give it enough practice, you’ll be ready for those first few mysterious calls coming from the trees.

So there you have it! Your training regimen. Use these remaining March days to prepare yourself for spring migration, and you’ll be the prince or princess of your own point when the birds return.