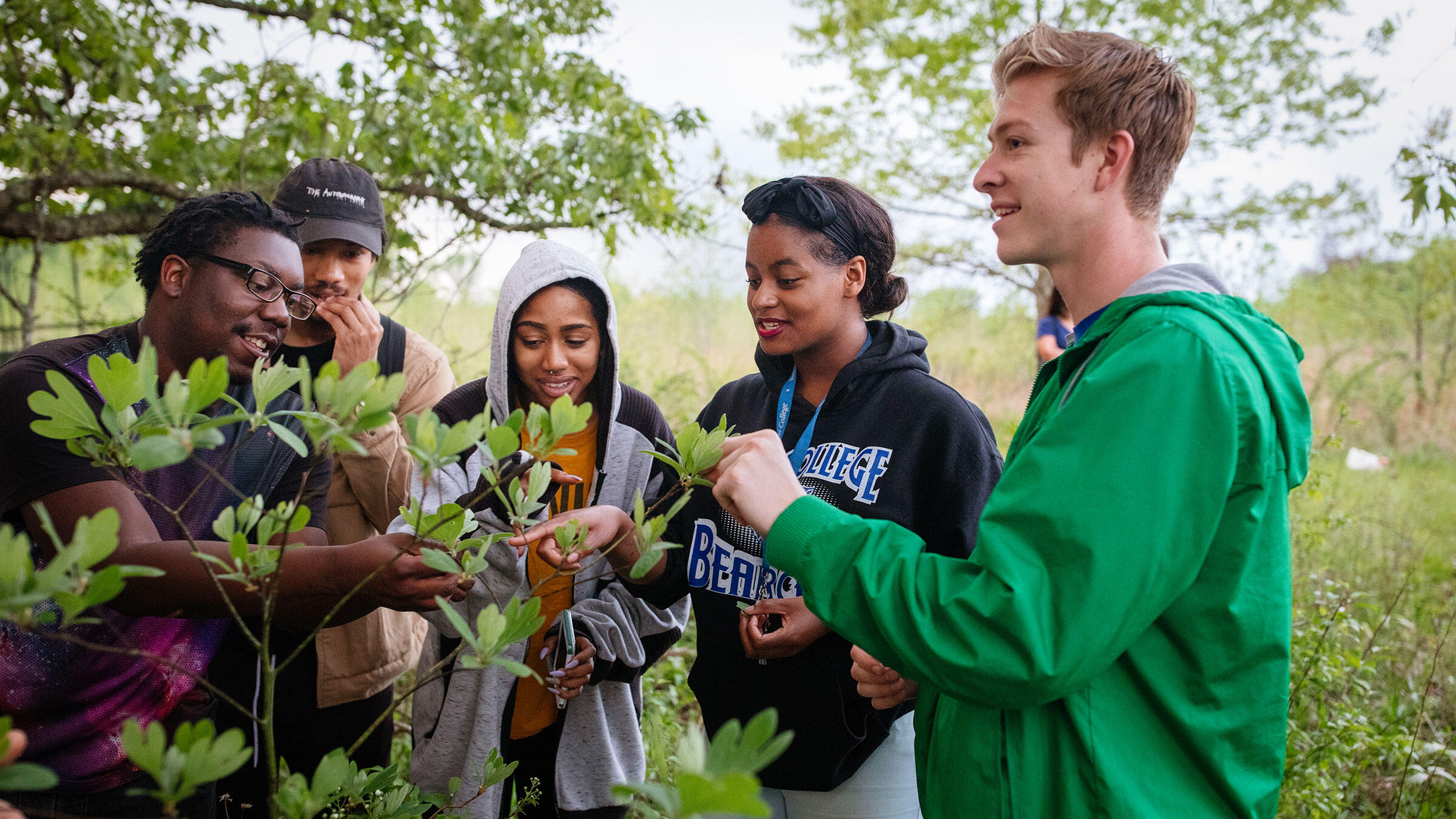 Students from Rust College and University of Mississippi learn about Sassafras albidum, a native tree with a multiple benefits to wildlife. Photo: Mike Fernandez/Audubon

The Audubon on Campus chapter program arrives in Mississippi and attracts a network of students that want to create a birding community for all.

Last month, students from University of Mississippi in Oxford, and Rust College in Holly Springs, met up at the Strawberry Plains Audubon Center to connect on more than just birds. These young conservation leaders are working together to make sure that conservation—and Audubon—is for everyone.

The gathering was organized by Audubon’s campus chapter program, an initiative that aims to foster the next generation of advocates, field technicians, scientists, and birders with the Audubon network. The program gives interested students resources that provide guidelines for starting Audubon initiatives on campus as well as opportunities to work with Audubon’s local chapters, centers, and state offices.

In April, Magnolia Grove Campus Audubon at the University of Mississippi became one of the newest Audubon on Campus chapters, and the first one in the state. Like the dozens of other campus chapters in the program, Magnolia Grove Campus Audubon is dedicated to a specific cause pertinent to their regional and campus climate: creating a more mindful, diverse, and bird-friendly community at the University of Mississippi and surrounding areas.

In the midst of final exams, members also geared up for the school’s Earth Week festivities. The University of Mississippi’s office of sustainability and its environmental studies department hosted a series of events including gardening activities, a David Allen Sibley art exhibit, and a keynote address from Clemson University biologist and Audubon board member Drew Lanham. Though the university’s sustainability fair was cancelled due to inclement weather, members of Magnolia Grove Audubon showed up bright and early, with their boots, raincoats, and binoculars ready for Lanham’s bird walk at Rowan Oak, William Faulkner’s former home in Oxford, Mississippi.

Rachel Anderson, a biology major at the University of Mississippi and president of Magnolia Grove Audubon, first got the idea to start a chapter when she volunteered at Delta Wind Birds, a non-profit organization dedicated to creating and restoring habitat for migratory shorebirds. Though she was nervous to step into her role as Magnolia Grove Audubon’s first president, Anderson says her decision to do so was solidified after hearing Lanham speak on “focusing on the best parts of what a community could be and going towards that end.”

“It can be hard for students to think they can make a difference, but what really inspired me to start this chapter was my genuine care about the community and environment around me,” says Anderson. “When I first saw the Audubon on Campus chapter handbook, I thought this would be a great way to interact with students from a wide range of interests and backgrounds. In order for us to reach our goal of creating a new generation of supporters for the conservation movement, we will make direct efforts to other interest clubs on campus.”

As the Audubon on Campus chapter network continues to reach more campuses across the country, one of the goals is to provide underrepresented communities with resources and opportunities to succeed in the conservation field, says Ray Sessley, Fund II Apprentice for the program. One of the ways in which Sessley is supporting this initiative is by focusing his outreach to Minority Serving Institutes and Historically Black Colleges and Universities like Rust College.

Rust College’s proximity to the Strawberry Plains Audubon Center, as well as having faculty member Alisea McLeod on Audubon Mississippi’s board, formed the perfect foundation for the partnership. Mitch Robinson, conservation education manager at Strawberry Plains, initiated talks with McLeod in an effort to attract young and enthusiastic people to the center. But the idea of forming a chapter at Rust College came from a meeting with the newly formed Magnolia Grove Audubon Chapter; members knew there was huge potential for both groups of students in a partnership with Rust. 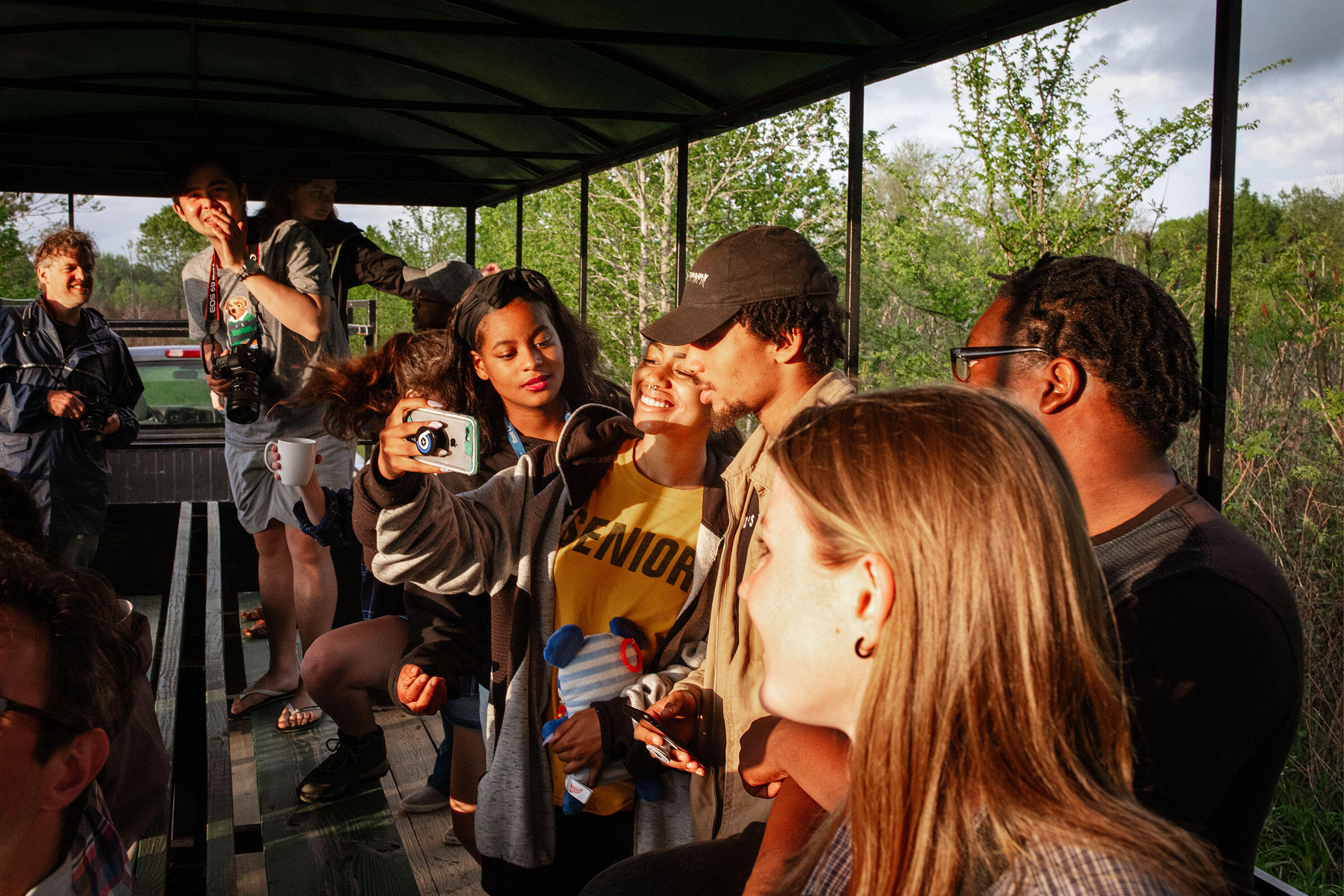 Students from Rust College and University of Mississippi take a moment for a selfie during a wagon ride through Strawberry Plains Audubon Center’s early successional habitats. Photo: Mike Fernandez/Audubon

In addition to facilitating that connection between the two institutions, Sessley went to Rust College to recruit interested students and inform them about how to formalize their chapter. Though his presentation coincided with the college’s last week of final exams, Sessley spoke to a classroom filled with prospective members and faculty advisors. The Rust College campus chapter was recently certified and is now a full-fledged member of the Audubon on Campus program.

Sessley describes the scene of Rust College and University of Mississippi students talking about common interests, exchanging contact information, and planning for future collaborations as “picture perfect.” Since both schools recently finished up their semesters, Sessley plans to keep up engagement between the two groups. He knows it will take time for ideas to manifest into events and partnerships, but feels encouraged by what he has seen so far.

“I see a lot of myself and my circumstances in the Rust College students," he says. “It was so beautiful, seeing the future leaders of Audubon meeting each other in the middle, creating community, and sharing thoughts on their shared missions.”