Twice a year, millions of birds embark on long, perilous journeys between their breeding and wintering grounds. These flights, spanning hundreds or thousands of miles, require a lot of energy. In the spring, neotropical migrants travel from Latin America to nest in the Northern Hemisphere, where they take advantage of budding plants and abundant insects. As winter approaches and food supply dwindles, birds move south and devour fall fruits along the way to fuel their trip.

But they don’t eat just any fruit on their autumnal journeys: Birds are after native berries, according to a study published in Biological Conservation in January. Even in late autumn, when fruits of invasive plants like Japanese barberry and multiflora rose dominate the landscape, migratory songbirds traversing New England seek out native blueberries, black cherries, and raspberries instead.

North American birds evolved alongside North American plants for many thousands of years, so these are the berries they’re most familiar with. But that’s not the only reason to choose one fruit over another: Previous research has found that native fruits are more nutritious than their invasive counterparts. “They can’t be eating ‘fast food’ before they take off on really long migrations,” says ecologist Amanda Gallinat at the Utah State University, who led the new study. “They need something with high energy.”

In New England, non-native plants account for a third of the region’s flora, and some of these species are becoming invasive in ecosystems such as the rich, mesic forests of Massachusetts, Vermont, and Connecticut. Gallinat and her team wanted to find out if non-native fruits replaced native berries in migratory bird diets. In fall 2014 and 2015, they studied the fruiting schedule and availability of 25 common plants—16 native and 9 exotic species—bearing fleshy fruits in Manomet, Massachusetts, a migratory stopover site along the coast.

Meanwhile, to study the birds’ diets, bird banders collected more than 450 poop samples from migratory birds like Hermit Thrushes, Gray Catbirds, Baltimore Orioles, and others. “We got lots of colorful samples,” Gallinat says. “When banding the Swainson’s and Hermit Thrushes, you’re almost guaranteed to get purple poop,” thanks to black cherry or American pokeweed fruits.

Using forceps and paintbrushes, Gallinat carefully recovered seeds and other food items from their excrement. Then, she meticulously cataloged each element. Altogether, she found that Manomet’s migratory birds chose to feast on native berries and almost entirely ignored non-native fruits like Japanese barberry, multiflora rose, and privet.

Gallinat and her team also wondered if fruit availability in the Manomet area motivated the birds’ diet choices. So, every week between August and November, she observed 125 native and non-native plants—five individuals each of the 25 different species—to document when their fruits ripened. During the same period, she also estimated the number of ripe fruits in 90 plots, each encompassing a 22-square-foot area and located alongside sites that researchers used to collect poop while banding birds at Manomet.

Turns out, native plants bore maximum fruit in the late summer and early autumn, whereas invasive fruits peaked in abundance 20 days later, sometime around mid-October. This fruiting schedule was consistent with past fruiting records spanning between 1849 and 2013 that the team obtained from several herbaria across New England. These fruiting schedules are so reliable that birds have been able to depend on them for millennia, but with climate change spurring more species to shift their migration patterns, they are at increasing risk of missing the prime native fruiting times, which are starting to happen earlier.

“As birds migrate later, they are more likely to encounter invasive fruits,” Gallinat says. In fact, a study shows that several migratory birds are passing through Manomet later in autumn, tracking warmer temperatures that now stretch later into the year. But even amid ample invasive fruits, her work suggests that these birds may still chase down native berries. In Gray Catbird poop samples, for instance, native blueberry seeds were commonplace, even when these fruits were past ripe or nowhere to be seen later in the fall.

“It makes sense,” she says. “Birds have preferences. Native fruits are providing the things that they need.” Although her team did not measure the nutritional value of these fruits, they strongly suspect it drives up the fruits’ appeal based on the previous such research.

These findings don’t mean that birds never eat invasive plants. Research led by ecologist Jen Owen at the Michigan State University, who wasn’t involved in the new study, suggests that in years where native berries are rare, birds will turn to invasive fruits. For example, at Rose Lake Wildlife Research Area in Michigan migratory birds devoured native American spicebush berries in the fall—but in years when the plants didn’t produce fruits, the birds consumed invasive European buckthorn fruits instead. When birds eat these fruits, they disperse the seeds far and wide and aid further invasion of these exotic plants.

While invasive plants may be here to stay, there is a way everyone can help slow their spread while also aiding migratory birds: By planting locally native fruit plants in our parks and backyards, we can provide birds with the nutritious resources they need to fuel their long-distance journeys south. And by planting other native flora, we can also supply the buds and bugs they need on their return trips in the spring. Even just a little bit of restored habitat can help these birds go a long way.

Correction: On June 22, the study authors contacted Audubon with a correction to their published article: They monitored 16 native species and 9 invasive species, not 15 native and 10 invasive species as originally reported. Audubon has updated the article accordingly. (Read the scientific correction here.) 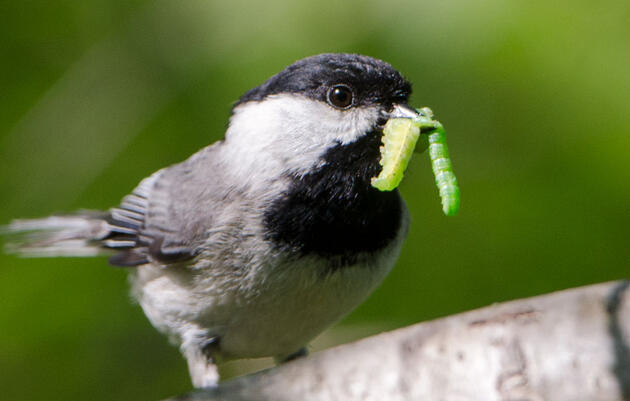 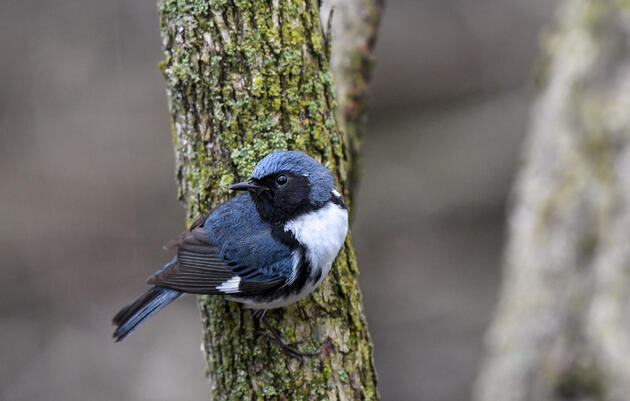 Black-throated Blue Warblers now start spring migration 5.5 days sooner than they did in the 1960s, a new study finds. Is climate change to blame? 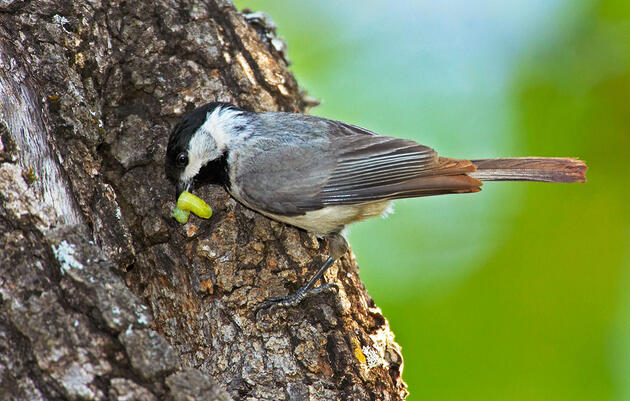 The study found that oaks and other native trees deliver a major chunk of the Carolina Chickadee’s insect-intensive diet.