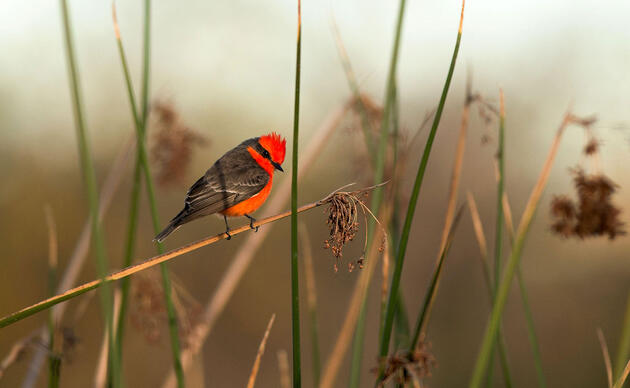 (UPDATE 8/21/20): On August 6, 2020, the Central Arizona Water Conservation District (CAWCD) Board of Directors--the elected board that manages the Central Arizona Project, the 336-mile long canal that delivers Colorado River water to central Arizona cities like Phoenix and Tucson—took up the issue of whether CAWCD should support S. 4228, the Water-Energy Technology Demonstration and Deployment Act. Thanks to Audubon and our network’s efforts to alert decision makers to the consequences of the bill with its de facto mandate to operate the Yuma Desalting Plant, the CAWCD Board of Directors did not end up supporting the bill.

We know our voices were heard: within hours of advocate emails reaching CAWCD Board Members, the recommendation from staff on the bill moved from “support” to “monitor.” Several Board Members also mentioned that they had received hundreds of emails from concerned individuals, and were very appreciative of being made aware of the issue. While the CAWCD Board decided to monitor the legislation for now, the fight over the Yuma Desalting Plant is not over. We will continue to monitor developments and keep talking with decision-makers, including the bill’s sponsor—Senator McSally—as we aim to build support for existing alternatives to operating this harmful desalting plant.

New legislation proposed by Senator Martha McSally (R-Ariz.) would destroy the Ciénega de Santa Clara, the largest remaining wetland in the Colorado River Delta, essential for birds there and many birds that travel to the United States during migration. This is because the Water-Energy Technology Demonstration and Deployment Act instructs the federal government to operate the Yuma Desalting Plant through a new partnership between the U.S. Bureau of Reclamation and the Department of Energy. While the broader purpose of the legislation—to secure federal investment in energy and water—is laudable, the mandate to operate the long-defunct Yuma Desalting Plant is a mistake. It’s bad for birds, and for our existing agreements with Mexico.

The Ciénega de Santa Clara is a 40,000-acre wetland that survives on some of the last drops of Colorado River water allowed to flow to nature. The Colorado River Delta historically was North America’s largest and most productive desert ecosystem, but more than a century of water development in the western United States and northwestern Mexico eliminated nearly all of the delta’s ecosystems: some 1.5 million acres of meandering rivers, riverside forests, and wetlands.

Mexico manages the Ciénega de Santa Clara as a federal natural area with the highest protections of its Biosphere Reserve program, and it is listed in the International Ramsar Convention on Wetlands. Notably, the Ciénega is home to 70 percent of the world’s remaining population of the Yuma Ridgway’s Rail, listed as an endangered species in the United States. Indeed these birds travel back and forth between the two countries.

The Colorado River is so completely developed that it no longer flows down its final 100 miles. The water supply for the Ciénega de Santa Clara originates as Colorado River water that, after irrigating farms in Southern Arizona, flows as brackish water too salty for farming and then drains into a canal that has fed the Ciénega for nearly 50 years. Senator McSally’s legislation would eliminate this water supply, and destroy the Ciénega.

In 2019, Arizona, as well as the six other Colorado River basin states and Reclamation, adopted the Drought Contingency Plans to avoid the risk of severe water supply crises. In those plans, Reclamation committed to work towards the goal of conserving 100,000 acre-feet of Colorado River water annually. Reclamation has already begun work on several projects to fulfill this commitment without needing to operate the Yuma Desalting Plant.

Notably, Arizona recently collaborated with Mexico to study the feasibility of a binational ocean desalination facility on the Upper Gulf of California that could potentially supply the Lower Colorado River Basin, including Arizona, with twice the volume of water that could be produced at the Yuma Desalting Plant (200,000 acre-feet). Senator McSally’s proposal, which Mexico does not support, would jeopardize any prospect for future cooperation on a binational desalination project, and furthermore could jeopardize Mexico’s existing commitments to share in Colorado River shortages. Without Mexico as a partner in stabilizing Lake Mead, Arizona’s water shortage risk grows even larger than it is today.

While Audubon supports efforts to stabilize water supplies in the Colorado River Basin, the consequences of restarting the Yuma Desalting Plan would be catastrophic.

The Yuma Desalting Plant sits dormant in the southwestern corner of Arizona, embodying both the promise of new water and the peril of environmental Armageddon.

Update to U.S.-Mexico Water Treaty Is a Huge Win for Conservation

Audubon and its partners played a key role in the negotiations for Minute 323, which sets aside 200,000 acre-feet of water for environmental purposes.