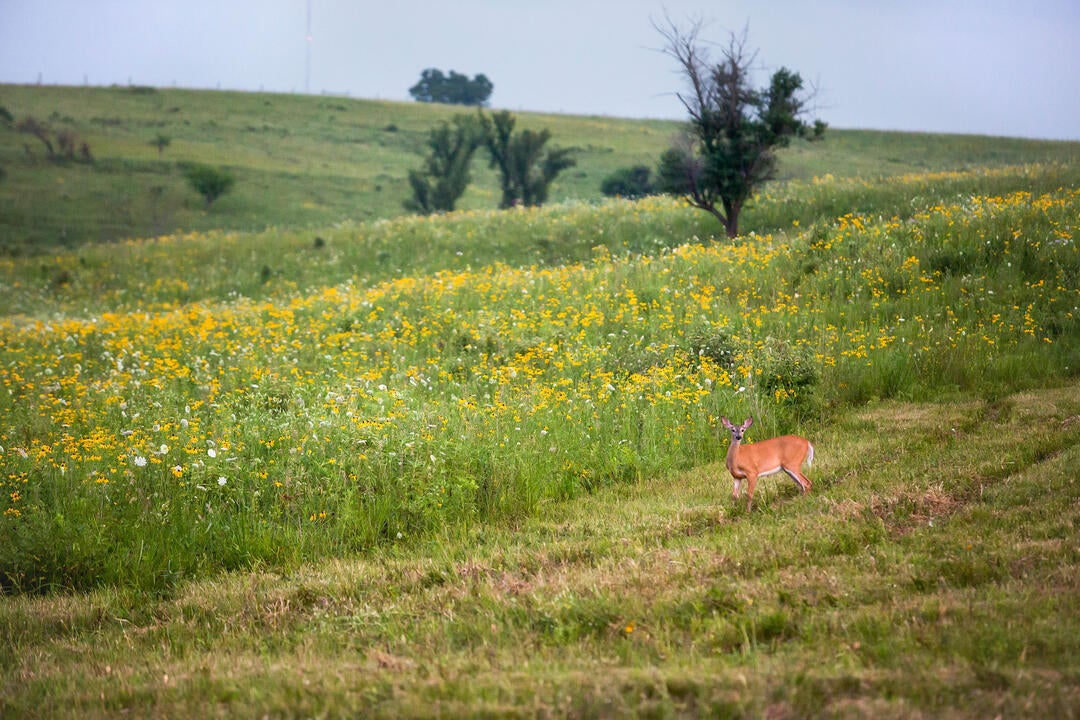 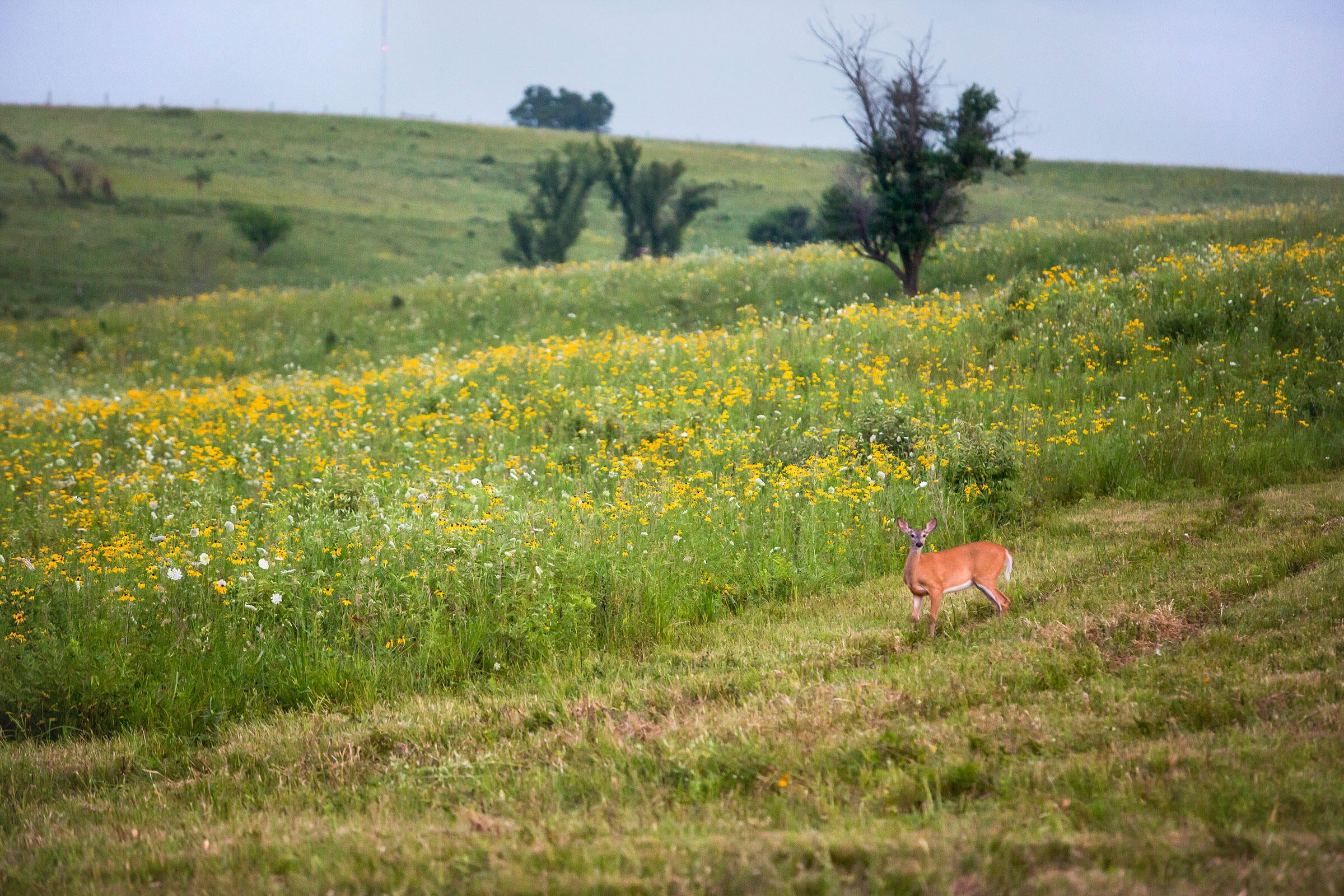 The world’s largest set of lands dedicated to preserving wildlife started with a five-acre scrap of sand and guano. In 1903, to protect a raucous rookery of Brown Pelicans from poachers, President Theodore Roosevelt designated Florida’s Pelican Island as the first unit of what would become the National Wildlife Refuge System.

Since then the network has grown to 568 refuges spanning 95 million acres. More than 200 of them were designated specifically to safeguard places where birds overwinter or rest and refuel during migration, including birding hotspots such as Cape May, in New Jersey, and Santa Ana, in Texas.

Some 59 million people visited a refuge last year. Amid so much natural beauty, it’s likely that few noticed anything amiss. Those intimately familiar with these sanctuaries, however, discern a harsher reality: The refuge system is shouldering a growing workload—more visitors, more land to manage, and more maintenance needs—while being chronically underfunded. As one result, since 2011, the system has shed more than 700 staff positions, even as it grew by 15 refuges.

threatened and endangered animal and plant species found on refuges

“We are shutting down basic wildlife management and visitor services, but it’s been screened from the public so far because our dedicated staff keep doing the best they can with less and less,” says one refuge manager who, directed by officials not to speak with the press, commented on condition of anonymity. “In my 20-plus-year career, I have never seen the morale of refuge employees so low...Our leadership doesn’t want to acknowledge what is happening.”

The U.S. Fish and Wildlife Service (FWS), which manages the refuge system, declined to answer questions from Audubon for this article, or to make refuge staff available for interviews. The agency instead sent a statement from Cynthia Martinez, chief of the system. “What makes the Refuge System stand out is the dedication of our managers and teams to wildlife conservation—their zeal for protecting America’s public lands,” she wrote. “They have done an outstanding job maintaining the highest possible level of public services and conservation.”

Remaining staff are indeed doing heroic work, but they’ve been given an impossible task, say refuge friends groups—local conservation nonprofits that have stepped in with fundraising and volunteers to fill the system’s widening cracks. We spoke with leaders of these groups across the country, including former refuge staff, who provided a window into the state of these sanctuaries.

A lack of resources throughout the refuge system is limiting its capacity to provide healthy habitat for birds and other wildlife. Essential infrastructure is crumbling. Managers oversee growing groups of refuges that are lumped together even when they’re hundreds of miles apart. And staff can’t provide the community outreach and visitor services they want to offer.

Bigger Than Our National Parks

Bigger Than Our National Parks

Fixing these problems would take at least $900 million a year, advocates say. That’s a far cry from the refuge system’s budget of $502.4 million for the 2020 fiscal year. Today’s funding is near the budget’s high point of $502.8 million, in 2010, but with inflation factored in, it’s in effect about $100 million less than a decade ago.

Some relief is coming for the system’s infrastructure. The Great American Outdoors Act, which President Trump signed in August, dedicates $475 million of federal fossil-fuel revenue, spread over five years, to tackling the system’s $1.4 billion in deferred maintenance. It’s a major investment, but one that represents only 5 percent of the act’s $9.5 billion maintenance allotment. U.S. national parks—smaller than the refuge system by 10 million acres, albeit with a deferred maintenance bill an order of magnitude larger—get 70 percent.

The discrepancy reflects how refuges have long been overlooked and undervalued, conservationists say. As Audubon’s investigation reveals, this neglect is eroding the system’s ability to fulfill its core mission of protecting wildlife and their habitats for the benefit of ecosystems and people alike. 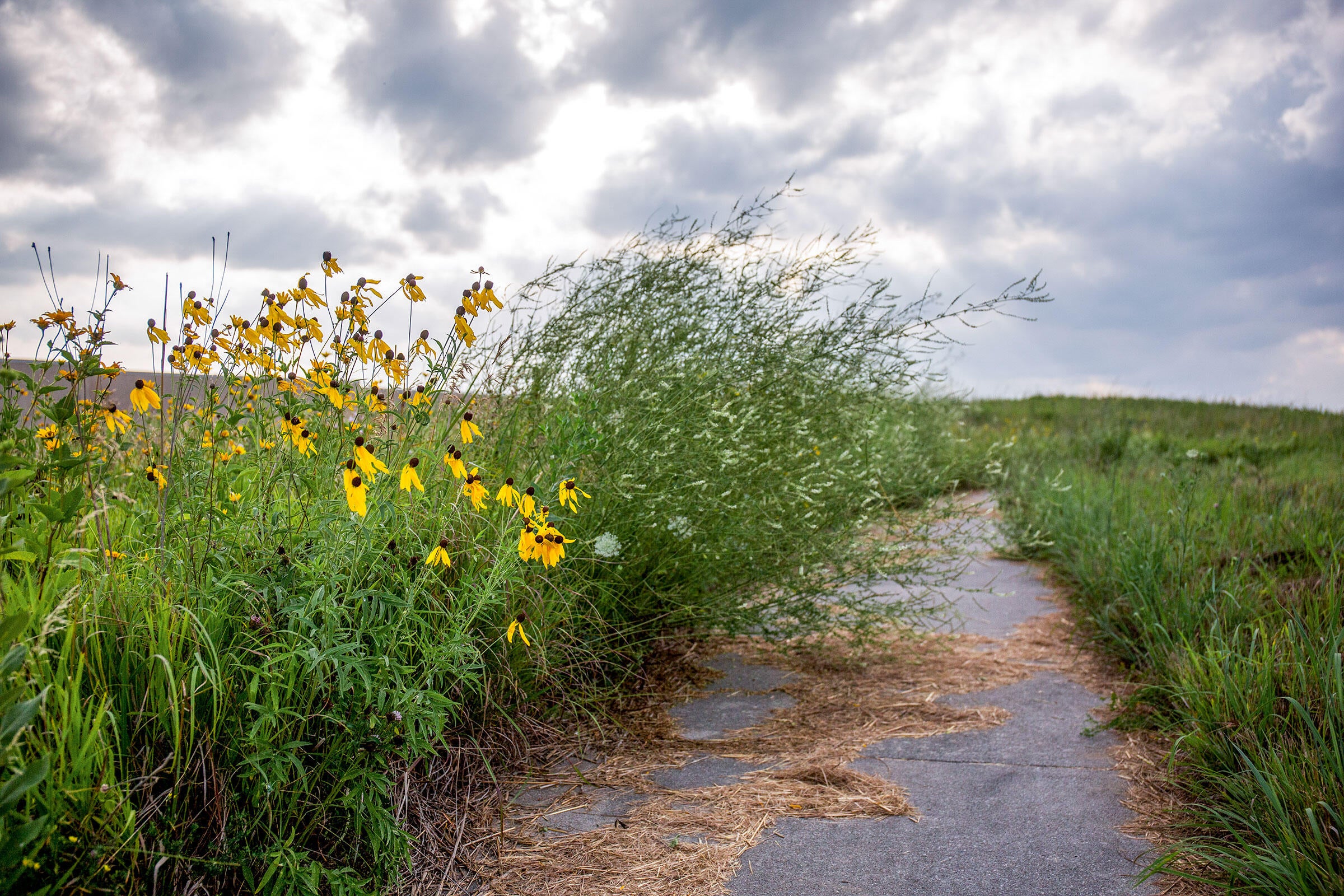 Before white settlers arrived, tallgrass prairie covered 80 percent of Iowa. Today less than one-tenth of 1 percent remains. So, when the FWS bought what is now Neal Smith National Wildlife Refuge in 1991 after plans for a nuclear power plant there were scrapped, it saw a chance to create a refuge unlike any other, one that would restore a portion of the grassy sea that once defined the state’s landscape.

For this native prairie to thrive, it must occasionally burn. Controlled fires at Neal Smith have been key to controlling invasive species, which the FWS considers the second-greatest overall threat to biodiversity and endangered species, right behind habitat loss. “We’re always fighting weeds,” says Joan Van Gorp, president of Friends of Neal Smith National Wildlife Refuge. “If you don’t keep ahead of it, those weeds and invasives are going to take over again.”

But using fire in that fight has become more challenging; the refuge needs 8 to 10 people on hand to safely start a burn, but its staff is down to 3. They can only burn when the weather is right and extra bodies are available. There were no prescribed fires there in 2018, and none this year as of early August.

Protecting habitat is, after all, the reason these refuges exist. But advocates around the country told Audubon they’re concerned that, with budgets strained and staff overextended, some wildlife and habitats simply aren’t getting the attention they need.

But the banding program ended in 2008, mostly because of budget constraints. Then, in 2016, Goslin’s position was eliminated. Now she says the refuge is operating without those surveys to guide it. “If you don’t have enough boots on the ground to see what’s going on, you don’t know,” she says. “You’re just guessing.” More people use the refuge system each year, but with inflation factored in, it has far less funding than a decade ago. The annual budget figures below are adjusted to 2020 dollars using the consumer price index.

VISITORS (MILLIONS) 2020 data not yet available More people use the refuge system each year, but with inflation factored in, it has far less funding than a decade ago. The annual budget figures below are adjusted to 2020 dollars using the consumer price index.

2020 data not yet available

There also are fewer trained experts to look after Florida’s St. Marks National Wildlife Refuge, a mosaic of Gulf Coast marshes, tidal creeks, and towering longleaf pine forests, says Susan Cason, president of the local refuge friends group. “A year ago there were two biological staff,” she says. “Now there is one, and when he retires this year there will be no biologist on staff.”

It’s a significant loss. Biologists at the refuge manage habitat for the endangered Red-cockaded Woodpecker and threatened frosted flatwoods salamander. Cason’s group established an internship program in 2015 to help monitor those species, but that’s not the same as having staff biologists, she says.

Some wildlife advocates are particularly concerned that the Trump administration is opening more refuge land to hunting and fishing when there are too few staff to track the impacts of that expansion. Both activities have a long tradition on wildlife refuges, but they’ve gained new prominence; in August, the Interior Department announced additional hunting and fishing opportunities on 2.3 million acres, on top of 1.4 million acres opened last year.

“A refuge is supposed to be just that: a refuge,” says Terri Fuller, president of Friends of Horicon National Wildlife Refuge in Wisconsin. With only one law-enforcement officer patrolling a complex that includes four refuges and a network of Waterfowl Production Areas scattered across 17 counties, Fuller worries about how the increased hunting pressure at Horicon will affect wildlife—especially endangered Whooping Cranes. “It’s supposed to be an undisturbed sanctuary.” 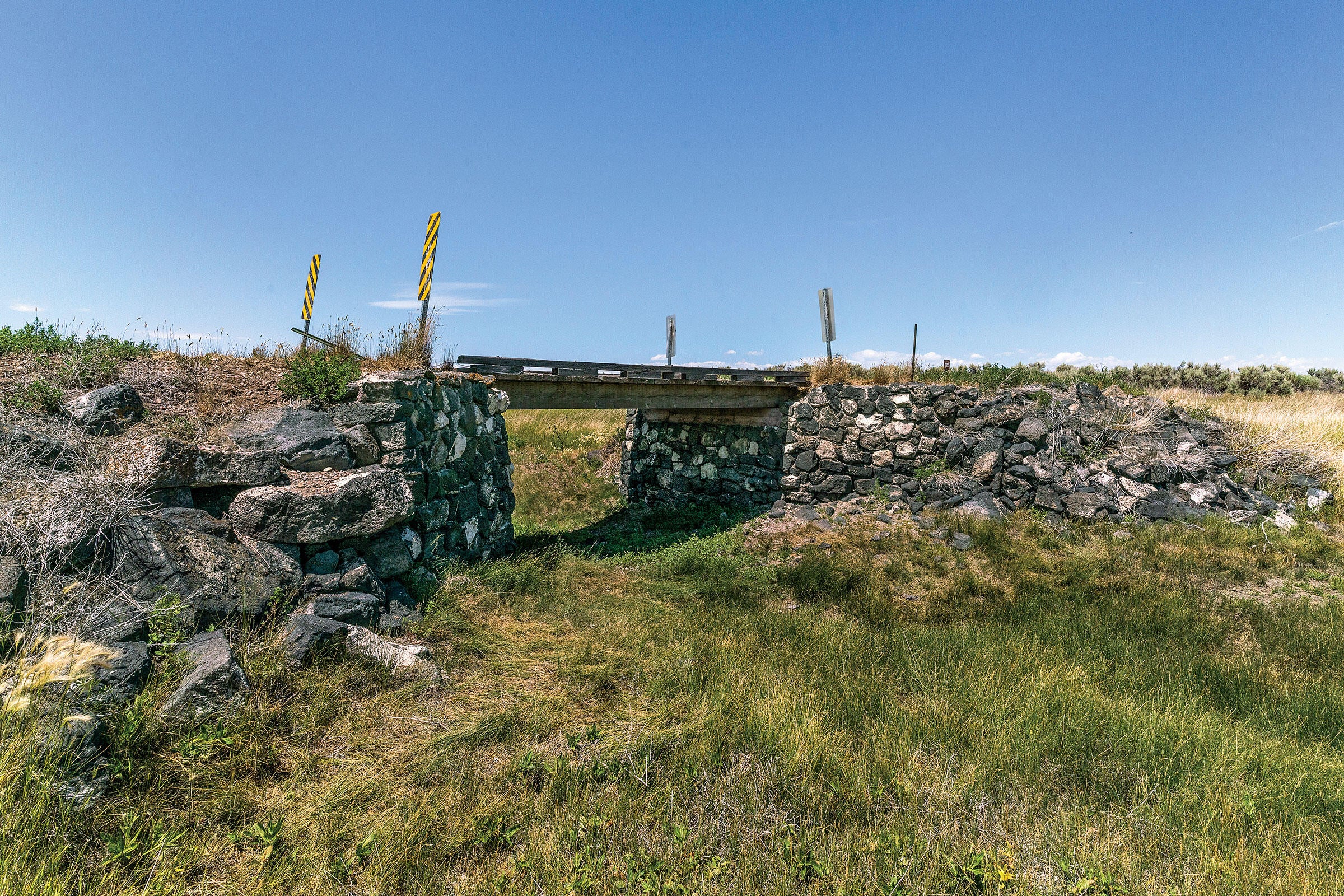 Aimee Arent remembers how things used to be at Ottawa National Wildlife Refuge. Growing up in Ohio, she explored the sanctuary on Lake Erie’s southwest coast and the nearby birder’s paradise, Magee Marsh, with her family. Later, she enlisted in a marsh-monitoring program, and then worked as an interpretive park ranger.

And so Arent, now executive director of the Friends of Ottawa National Wildlife Refuge, noticed when things started to change a few years ago. “I can remember when there was a very rare occurrence of a flood around State Route 2,” she says of the road that carries drivers past the refuge. “It’s like a daily thing in the spring now.”

Staff at Ottawa use dikes, culverts, and pumps to manage water levels so wetlands provide attractive habitat for waterfowl. That job got a lot harder as Lake Erie rose to its highest-ever level last year—2.6 feet above normal. With heavy rains charged by a warming climate, high water is toppling Great Lakes records again this year.

“We get to a point where the pumps are running all the time trying to get the water out just to have the habitat there,” Arent says. “It’s a losing battle. Mother Nature is kind of kicking our ass.”

It would be a tough fight under any circumstances, but Ottawa has one arm tied behind its back: Its aging water-control structures are failing. The refuge just doesn’t have the money to repair them, Arent says, let alone upgrade them to face the realities of climate change.

Failing infrastructure is one of the main issues facing wildlife refuges nationwide. The FWS oversees 25,000 structures and 14,000 roads, bridges, and dams. Many of them have fallen into disrepair due to a lack of funding, and maintaining them swallows already strained staff time, compromising other parts of the refuge, advocates say.

The inverse of Ottawa’s problem is playing out at Camas National Wildlife Refuge, a high-desert oasis in Idaho’s thick belly, where a diminishing water supply is forcing a reckoning with outdated infrastructure. Snowpack in Idaho’s mountains has been decreasing for decades. Meanwhile, the area’s water table has dropped 15 to 20 feet since the 1980s, the FWS estimated in 2014, driven in part by changing irrigation practices on large farms near the refuge.

As a result, the ponds and wetlands that make Camas an important migration stopover for Tundra Swans and Snow Geese often shrivel into mudflats. With natural recharge dwindling, refuge staff have to pump more groundwater from wells to fill them. But between the wells and the wetlands lie canals more than a mile long that “leak like a son of a gun,” says Karl Bohan, president of the refuge’s friends group.

The solutions are clear, Bohan says. Moving wells closer to the ponds will save water that’s now lost in the leaky canals. And restoring Camas Creek’s natural contours will slow erosion, raise the stream’s water level, and help hold on to what precious flows remain.

Camas was established to protect wetland habitat in a dry region, a mission it can’t continue to fulfill without these upgrades, Bohan says. But neither can the refuge afford them—moving a single well costs up to $100,000. “Without adequate water,” he says, “we don’t have the breeding habitat. Our main focus has been a little bit thwarted.” 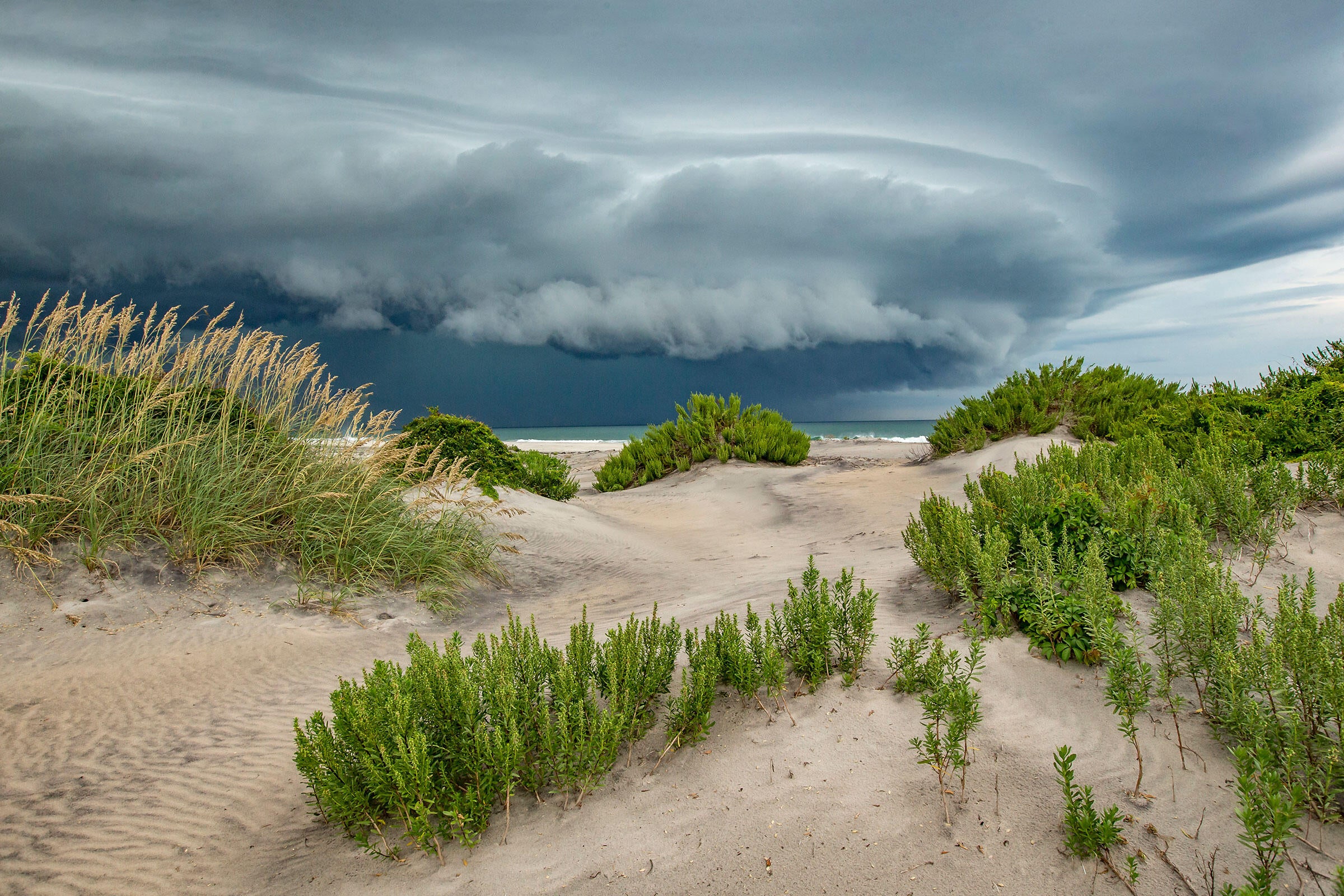 Pea Island is one of nine coastal refuges in North Carolina that have been lumped together in a complex, increasing demand on staff to manage more and more land. Photo: Mark Buckler

When Mike Bryant arrived in North Carolina in 1996, he was supposed to manage two refuges along the Atlantic Coast: Pea Island and Alligator River. But within a year, his workload doubled when the manager for nearby Mackay Island and Currituck left for a new gig and wasn’t replaced. The four units were lumped together in the North Carolina Coastal Plain National Wildlife Refuge Complex.

It didn’t stop there. In 2001 the complex absorbed Pocosin Lakes. Then, in 2009, Roanoke River. “This is all driven by budgets,” Bryant says. “They couldn’t keep hiring more staff—they had to give them more responsibilities.”

Bryant retired from the FWS in 2016, but the complex kept growing. It now includes nine refuges. Mattamuskeet, Swanquarter, and Cedar Island joined last October, when the manager overseeing the three retired.